A splitter to carry more than just audio

I am gradually acquiring devices that connect directly to my iPad and iPhone via the Lightning port:

I am also very new to IoT and started to learn tech BASIC, and have no idea whether or not what I want to accomplish can be done.

Here is the issue. When I have any of these accessories plugged in, I can not keep my iPhone or iPad powered or charging. The problem is similar to the Lightning headphones issue with the iPhone 7.

But Apple has now created a Lightning splitter with two jacks that allows listening with Lightning earphones while charging. I ordered one, but found that Apple did not provide a full data interface jack in the splitter - the data side only passes audio.

The iPad is popular with musicians, but they have to be super-careful that they start live or studio sessions with a full charge, because all the time they are running their device with a music interface occupying the Lightning port, their battery is discharging!

While this may be a lost opportunity for Apple, it got me thinking, I would like to build one, but first I have no idea if someone else may have already done so, and if not, how would I begin?

Has anyone ever tried to build a device that can not only pass audio, but data as well? Like plugging my device into my iMac or Air Book to access iTunes? Or being able to copy data to/from my memory stick?

What is the best way to do this? Materials I will need?

The image is just a mockup of what I think the final product might look like, but I am flexible. 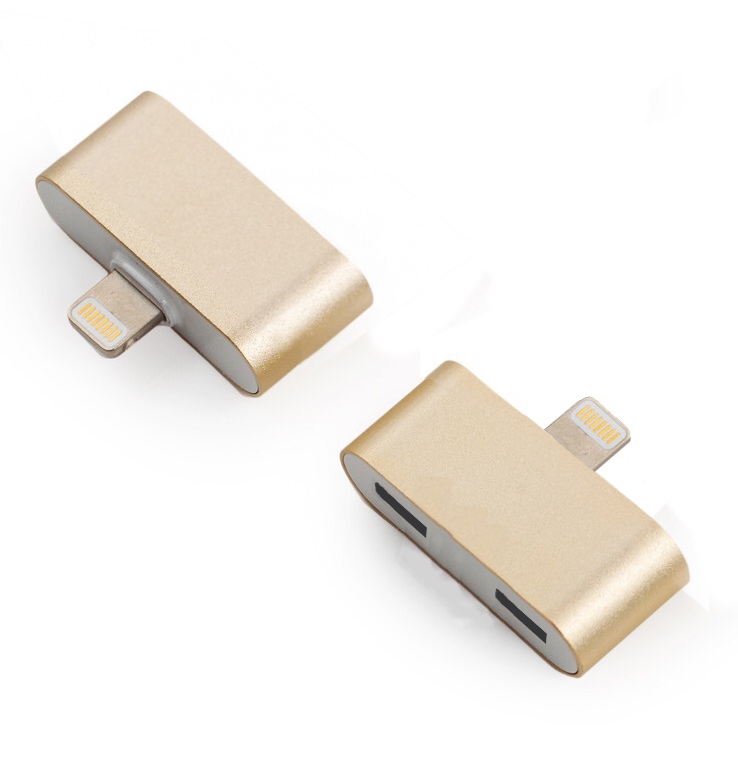 While doing my research, and before that another programmer did his research and asked me, I found some workarounds, but nothing was out there that addressed the specific answer on how to use the power or "lightning" port for other than music or audio files.

I mean, it should be able to handle data, like my documents, spreadsheets, text files, and such, as it does so when I connect my iPad to my iMac when doing backups. It transfers more than just music.

After weeks of my own research, I needed an expert as none have come forward. I felt this question was important enough to anyone looking to either get in on the hardware side or programming side of IoT, or both. And I was right.

So I asked Mike Westerfield, owner of ByteWorks, developer of techBASIC, and literally wrote the book (in fact several) on IoT the same question. He is trying to finish his new book, but he took the time this morning to reply:

I really have no idea if this can be done or not. In theory, of course, it’s possible — but Apple has always locked the physical hardware ports on iOS devices, requiring participation in the MFi program, use of Apple’s proprietary chips, and testing that I’ve been told averages about $10K per device to bring a product to market. You might be able to get around these issues for what is essentially a power supply coupled through the other port, but I don’t know enough about the hardware to answer that question off of the top of my head.

Researching Apple's MFi program explains why the IoT is so limited in its scope, and why I was told that no one can answer this question. Like those who develop IOS apps, you need to join the MFi developer's program, and if you write an app to use the hardware, then you need to join both. Plus the MFi devices requires royalties to be paid to Apple.

However, royalty information is only available to those who sign a Non Disclosure Agreement. But if you are accepted into the program, all the schematics, chips, etc. are available for you to use and test with. That's putting it simply. The complete program, for anyone interested is in the link above and the one following.

What is not part of the MFi program? According to Apple:

This is why IoT is only spoken about as a hobby and like Mike said, to get around this would mean a power supply (not from the Apple device) using another port, for no one, not even on the Internet has come forward with a solution to transmit anything from sensor data to data stored in a cloud to the Lightning port. Otherwise, this question would have had an answer long ago.

Before you hobbyist freak out, according to Apple, as long as you use existing technology, that even includes the Lightning port, you do not need to join the MFi. For example, Apple states if you are any one of the below, you do not qualify to join the MFi:

I want to develop cases for iPhone, iPad or iPod. Do I need to join the MFi Program?

No. If you intend to develop a case which does not connect electronically to iPhone, iPad or iPod using licensed technology, you do not need to join the MFi Program. For information regarding case development, please visit: http://developer.apple.com/resources/cases/.

I want to develop an accessory that communicates with an Apple device using only Bluetooth Low Energy. Do I need to join the MFi Program?

No. Accessories which connect to an Apple device using only Bluetooth Low Energy/BTLE/Bluetooth 4.0 or standard Bluetooth profiles supported by iOS are not part of the MFi Program.

I want to develop an iOS app that communicates with an MFi accessory. Do I need to join the MFi Program?

No. iOS app developers do not need to join the MFi Program. Everything app developers need is in the External Accessory Framework, which is provided in the iOS SDK. To access the iOS SDK, please join the iOS Developer Program: https://developer.apple.com/programs/ios/.

I want to source/sell MFi accessories as finished goods. Do I need to join the MFi Program?

I want to develop an MFi accessory for personal use. Can I join the MFi Program?

No. We recommend that you use a third-party hobbyist solution which will allow you to connect iOS devices to serial devices and to write iOS apps that communicate with these serial devices.

I want to teach students about developing MFi accessories. Can I join the MFi Program?

No. The information shared under the MFi Program is Apple Confidential and not intended to be used in an academic setting.

So far the Lightning port has been built or allowed to around the music industry, which include Lightning headphones and direct connectivity (From iConnectivity) from the Lightning port to USB Inline iOS connection cable (USB Type B) gives the ability to use your Lightning iPad/iPhone/iPod Touch as a part of your iConnectMIDI rig. Plugging in your synthesizer or sound module app into your performances and recordings. Even musical instruments.

However, an article from Fox News states that Iphone8 is doing away with the Lightning port in favor of the USB Type C interface, a new industry standard.

And that's not all. Apple, like Mike implied, likes to keep the locks on its hardware, and here is a little preview from an article from CNET, titled, "Apple's Lightning Connector And You: What You Should Know"

Not the answer you're looking for? Browse other questions tagged data-transfer iot .

3
iPhone data usage broken down by app
9
How do I download photos from my iPhone?
3
How can I transfer video from my Sony AVCHD camcorder?
6
Can I download apps larger than 50MB while using Personal Hotspot?
1
How do I get music onto my new laptop and the itunes i just downloaded?
2
Retrieving Old Mag Issues from Newstand iPad
1
Besides iCloud or a sync cable, how can i back up my files?
3
Use an old iPhone 6 just for audiobooks - Cannot transfer file from iTunes to iPhone
2
What type of cable can give the highest data transfer rate for an iPhone 5s?