My friend and I both own an iPhone 5s, which we have been using daily since bought (2013). Recently, he bought a $10 battery (0 cycles, manufactured 4 months ago) on eBay and replaced it, while my iPhone has the factory battery.

How do I test both iPhones to see if it's worth to change my battery too?

Note: cellular data is not available, only WiFi.

Monomeeth provides a good guide on how to do the process of testing your battery manually, but there are two ways to do this automatically (and with fewer variables that could affect results).

Battery Life (free ad-supported app) lets you check the health of your iPhone's battery immediately after downloading. In my experience, it's very accurate, and reviews seem to agree. Opening it up, you'll see a battery wear percentage on each of the iPhones, and approximate runtimes for talk/browsing/video usage.

The app is a simple way to objectively see if it's time to replace your iPhone battery. 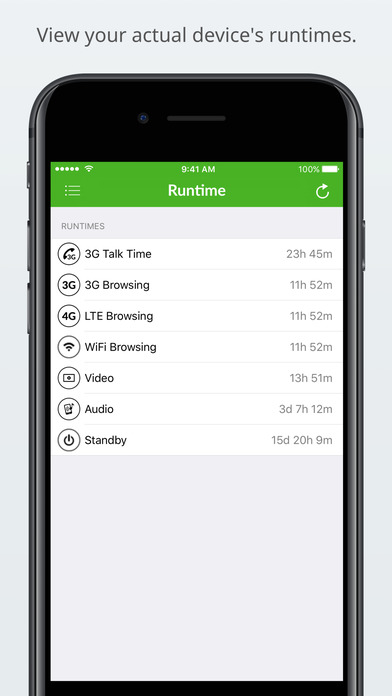 Disclaimer: I have personally used the app but I am not affiliated with its developer in any way.

If you bring your iPhones into the genius bar, a genius can help you run diagnostics on the iPhones to see each battery's wear and current capacity (at no charge).

This is definitely the more official way to do it, but it does require taking a trip to an Apple Store. Read more about Apple's battery diagnostic here.

tl;dr: Download this app or go the genius bar for a battery diagnostic (which is a real thing).

Note: In my personal opinion, whether it's time to replace your battery is more subjective than objective. If the battery life is significantly worse than you remember it being, it's probably time to get a new battery!

By implication, I'm assuming you don't want to just use an app, but instead want to do some real life testing.

However, the only way to do this and ensure some degree of accuracy is to ensure:

In a nutshell what you would do is something like the following:

Now fully charge both iPhones and leave them connected to AC power until 8am the next day, at which point you disconnect from power and perform the same test (i.e. same room, same movie, same volume, same brightness, etc).

NOTE: The above test scenario is only an example case of how you could test both iPhones. The idea of the scenario I outline above is just to get across how one would conduct a test of both iPhones to ensure some validity to the results. Or, to put it another way, to ensure you're comparing Apples with Apples (yes, pun intended). Also, one of the other factors you need to consider is your actual phone usage during the test - to ensure a valid comparison you'd really have to have the phone switched off.

Regardless of the test scenario you adopt, compare the differences in your battery percentages (and also whether one phone runs longer under the same conditions) to determine whether the $10 battery is worth the trouble.

1 Actually, while the start times should be identical, the end time may not need to be (and therefore neither the duration). This way you can take note of whether one phone can endure your test scenario for longer than the other and, if so, how much longer? For example, in my scenario, can one phone play the movie a full 4 times? Can both do that? Keep going to see if one can continue to play the movie for longer and, if so, how much longer?

In a nutshell, only you can decide, based on your test results, whether it's worth changing your battery too.

Not the answer you're looking for? Browse other questions tagged iphone battery .

1
MacBook battery/replacement battery does not work
6
Which model of Macintosh has the longest battery life?
3
Unsold iPhones & Battery Life
3
iPhone heat and battery drain
0
iPhone battery life continually worsening
1
iPhone 5s screen separation; what will happen when I take the device to an Apple Store genius?
3
Why does my iPhone not have any audio during phone calls?
2
iPad Pro 10.5" down to 92% battery health after 6 months of use (update: 84% after 1.5 years)
2
iPhone 5s shows low battery symbol with lightning bolt when plugged in