Is it possible to right click an item in finder an “move to” to move a file / folder to another location?

Is there a way to get an option when using finder to be able the right click and select "move to", in the same way you can "move to trash". I'd like to be able to move items around my finder this way.

Usually when I've got my laptop connected to a larger monitor I just pull 2 finder windows side by side and drag and drop to organise folders, but it would be really useful when on a smaller laptop screen to be able to do this.

Here's a picture of the Services workflow and note the settings under Options for the Move Finder Items action. 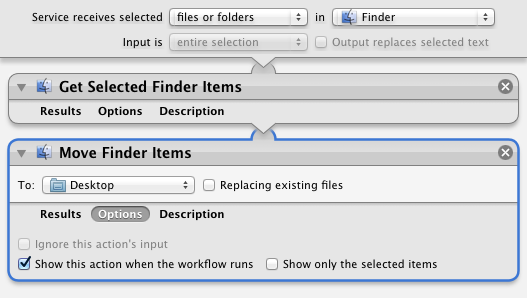 Checking the Show this action when the workflow runs check box brings up the Move Finder Items dialog box, as shown in the image below, where you can the select where you want to move the files/folders to.

Note that you can change the default To: location from Desktop to wherever you'd like and then save the Service so it's what you chose as the starting point each time the service is triggered. While not shown in the example picture, I have it set to Macintosh HD so when the Move Finder Items dialog box appears, I can click the Macintosh HD and then Other... on the popup menu easily, to bring up the Choose dialog box to more quickly navigate to where I want to go.

You can also assign a keyboard short to the Service in System Preferences > Keyboard > Shortcuts > Services > Files and Folders. I assigned it: ^⌥⌘M

If you select an item & either right click/Copy or Cmd ⌘ C
then Cmd ⌘ V will Paste to a new location, but Cmd ⌘ Opt ⌥ V will Move, as will holding Opt ⌥ as you right click; you'll see Paste change to Move.

5
Moving files in Finder with drag and drop opens a new window
10
Cut-Paste files or folders on Mac OS X
4
Messed up fonts on Mavericks retina Macbook Pro secondary monitor
8
Finder and Dock issues in OSX 10.10.1
7
How to copy-paste in Finder when there's no right-click space?
1
How can I force my right-hand monitor to always be my primary monitor on my MBP?
1
Make “move item” a default right click option
0
right click creates new finder window at click location
0
Move Dock to another screen edge when unplugging monitor
0
Drag and drop only going one folder deep in Finder