App can't be deleted having no name, just numbers

I recently tried to re-download Spotify after having some issues with low memory. Unfortunately Spotify didn't complete install, so there was only the grey app tile and after trying to delete it it remained as an uncompleted grey tile with just a number as name: 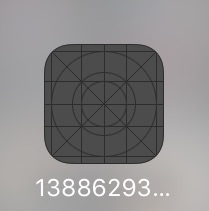 So I tried to delete it, but after confirming that all other data of that app will be deleted the app is still there. Pressing on the app has no effect. Reinstalling Spotify leads to having Spotify as a additional app - full functional.

I already made a soft reset (several times) also tried to delete it via iTunes (there it doesn't show up), via memory management (doesn't show up there neither). Finally I did exclude it from iCloud backup (shows up there - I know, it's funny).

Before I take the step to do a factory reset and recover the phone via backup - does anybody know what I can do else?

Resetting your iPhone's home screen layout should clear icons from apps that aren't downloaded (the relevant app icon appears to not be downloaded). This only involves moving icons around to suit your desire after the reset, no other data will be lost.

Tip: take pictures of your old layout before resetting to make the process smoother.

If that doesn't work, do a factory reset

Doing a factory reset and restoring your phone from a backup should fix this issue because the reset will clear all of your app icons and start the home screen from scratch.

Here's how to do that:

Note: data from apps that specifically request data not be backed up (like Google Authenticator) will be lost.

tl;dr: try resetting home screen layout first, but if that fails you'll need to do a factory reset.

Fun tidbit: You just found out Spotify's SKU, a unique ID for an app in the Apple system that is not seen by users.

Actually the best way is to back up your phone (password protect the backup so you don't lose your account passwords), then erase all content and settings and restore it.

SOLVED. I HAD same issue. Cleared enough memory to fully download app(uber) and the numbers turned into uber. Deleted app from there easy peasy lemon squeezy

Not the answer you're looking for? Browse other questions tagged iphone applications ios .

4
I have an app that won't open/sync & I can't delete it
3
Can't backup iPhone 5s (iOS 8.4) using iTunes 12.3 (because an error occured) or iCloud backup
1
iPhone 6 & iOS 9 - ad hoc app will not install
7
Need to know if I've bought a used iPhone? (multiple Apple IDs connected)
4
Messages no longer sorting by most recent message
6
No spoken Siri feedback with Shortcuts actions
0
IOS 12.1.4 - Apps bugged, can't delete or reinstall
0
How to recover storage from “Videos” pseudo app?