The Macbook's fans are annoying me to no end - they are running most of the time I do serious work, right from the minute I start. It can get hot here in the summer, but it happens also at reasonable room temperatures, like right now, at 23°C (73°F).

Here's a graph of my CPU load over an extended period of time, looking fairly relaxed to my eyes:

yet the fan is running constantly: 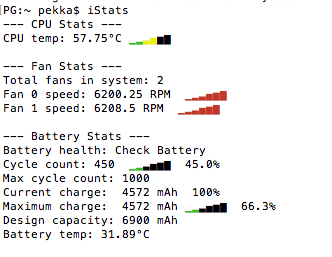 This has been happening for the past three versions of OS X, so it's nothing version specific. (I started thinking that maybe this isn't normal only recently.)

Things I have tried:

Is this normal? Is there anything I can do? Is there some unofficial way to get to the CPU, and maybe apply some better thermal paste? Is there some other potential bottleneck that I should look at other than CPU?

The machine is perfectly usable for me otherwise despite its age (after a RAM and SSD upgrade).

You need to strip & clean the entire airflow, if that fluff-ball was clogged in the outlet, there's an entire duvet inside. All the machines here get a full strip & clean once a year, with a 'quick blow round' in between. If it's gone 6 years without cleaning, it's likely to be pretty well-insulated in there by now.

These can help us find out if you have a run-away app or process.

After taking those screenshots, I'd advise performing a Safe Boot. Give it a few minutes of runtime, long enough for you to determine if it's better in Safe Boot or not, then restart to get back out of Safe Boot.

Air friction from the dust on each fan blade is a major debuff to the airflow, causing your fans to spin faster and louder to compensate.

Not the answer you're looking for? Browse other questions tagged macbook-pro ssd temperature .