“Your system has run out of application memory”, but memory pressure is not even at 50%? [duplicate]

Ask Question
Asked 5 years, 5 months ago
Modified 3 years, 4 months ago
Viewed 16k times
7
This question already has answers here:
"Your system has run out of application memory." How is that possible? (8 answers)
Closed 2 years ago.

The system has 16GB of memory, and the memory pressure looks well below even 50%. This doesn't make any sense. Usually the message starts popping after about 10 days without restarting.

Any light to shed here? I used to have a 12GB hackintosh with Yosemite and this NEVER happened, it lasted stable without restarting for months at a time, this is really ridiculous, I was really expecting for Apple hardware to be more reliable, not less. 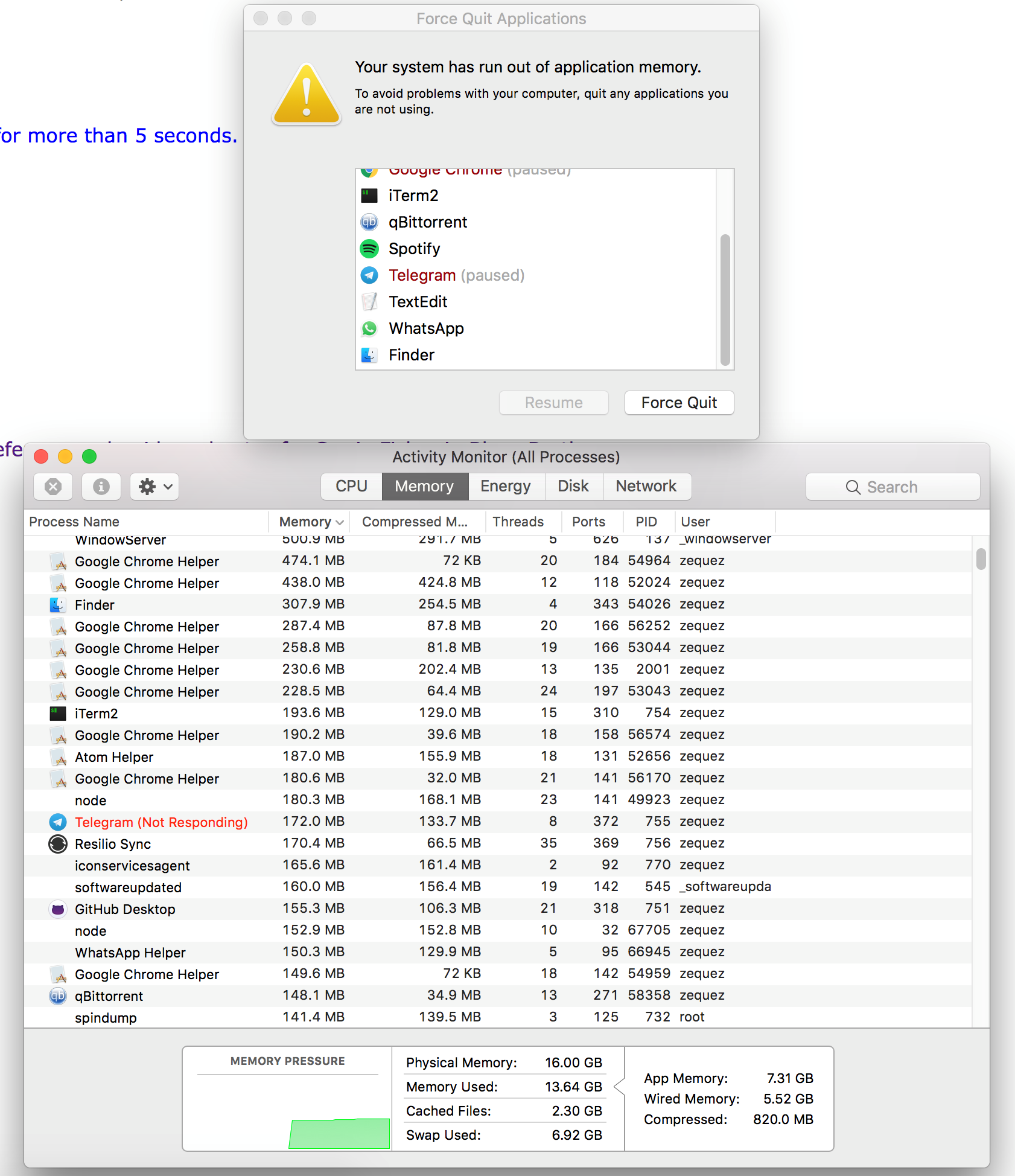 Note that memory pressure does not have a one-to-one relationship with the percent of memory used. Here's a previous thread explaining how pressure is measured.

Your system appears to have used all physical RAM you have (13.6 GB actively used, 2.3 GB of cached ram). Thus, when you open new applications or attempt to load a new webpage, some of the data in physical RAM is swapped to disk. If your disk is full, and it can't swap any more RAM, then this "Out of Memory" error could occur.

I'm somewhat confident this is a software issue, not hardware. As you mentioned, you don't regularly reboot your Mac. Rebooting essentially resets RAM, freeing up significant amounts of space. Taking a quick glance at the process list, there seem to be a lot of "status-bar" apps that reside in the background (like Telegram). Having so many applications open over the course of 10 days probably means a significant amount of information is being cached in RAM, which is why you have so high memory usage.

Fix this by closing stuff you aren't using, or reboot every time this happens. Alternatively, switch to a different browser (if you can/are willing) since Chrome has a litany of nice but memory-intensive features such as preloading search results.

If you're interested in finding what is really causing the memory usage, this very thorough thread has instructions.

Finally, the reason you never had this issue on Yosemite may have been that you simply didn't open as many apps, restarted more often, or had more disk space for swap.

Not the answer you're looking for? Browse other questions tagged macbook-pro macos memory error .

35
"Your system has run out of application memory." How is that possible?
150
How to investigate high kernel task memory usage?
59
What scale or measure does Mavericks' and Yosemite's "memory pressure" adhere to?
0
Continually getting "you do not have enough application memory" despite plenty free