I have an iPhone 7 which I bought directly from Apple, and my SIM contract is with Three here in the UK. I have been using this phone happily since September, I had noticed the mobile data connection flips between 3G and 4G which I thought little of at first. I figured 3G = HSPA/+ and 4G = LTE.

However, the other week I was with a friend in the US who had recently got a 7 plus. She is with AT&T and I noticed that her phone was most often displaying LTE as the connection type. I thought this was odd as I had never seen this on my own iPhone 7 and had presumed that 4G meant LTE. I did a little googling and found some discussions which claimed that on iOS the 4G mean HSPA+ and 3G means regular old 3G. In this case I was double confused as my carrier, Three, supposedly has a 4G LTE network and so I should see LTE from time to time.

I understand that Three does not have an LTE-Advanced network, only regular LTE. So is this perhaps the distinction and confusion? 4G = LTE and LTE = LTE-Advanced?

Could somebody perhaps clear up what is going on? Do I need to contact my carrier to change the network connection settings on my phone? If I can make use of the iPhone 7's faster mobile data tech then I would like to as I am a very heavy data user. The reason I went with Three was for their unlimited data tariff.

As requested by owlswipe. A photo showing Speedtest saying the network is "Three LTE" with the network icon at the top left saying "4G" which it did throughout the test. I am on 40th floor of a tower here so speeds aren't fantastic... 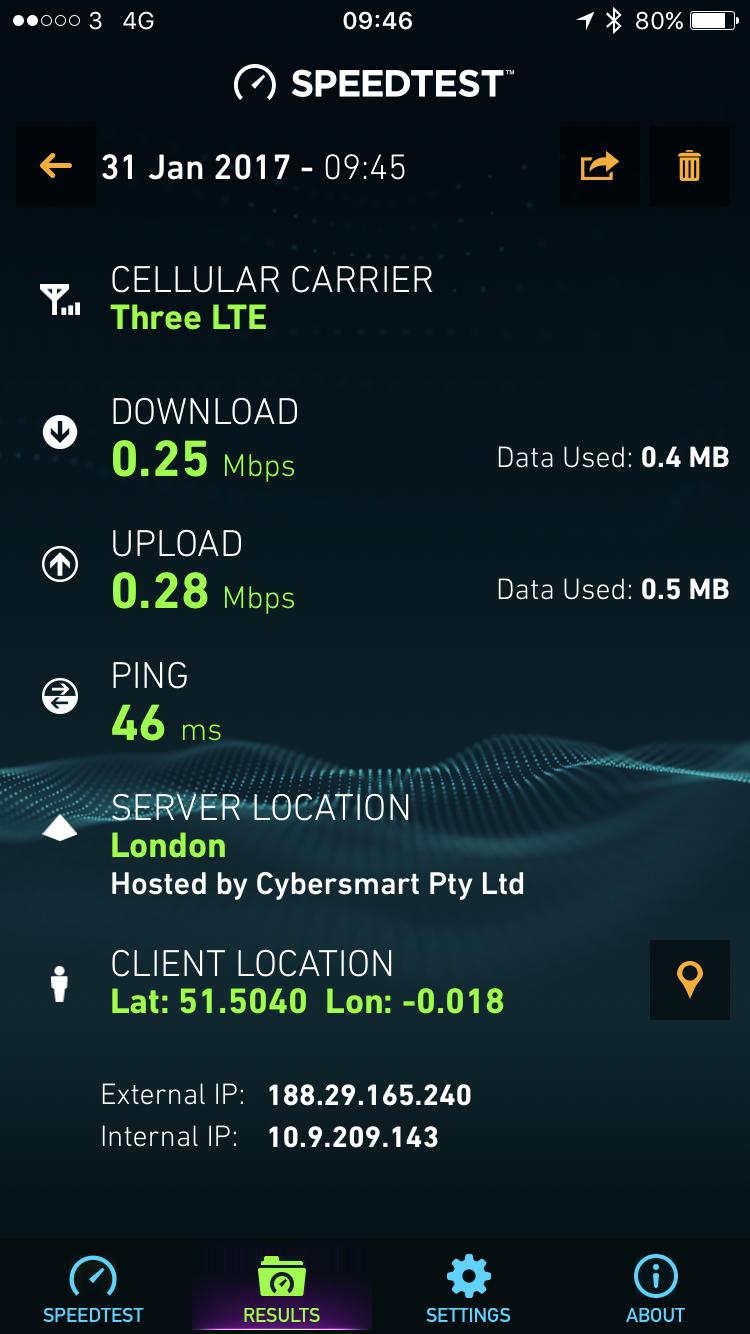 Most carriers support LTE on just about any modern smartphone, including iPhones going back to the iPhone 5. Indeed, Three rolled out LTE back in 2014.

Your friend is correct that 4G (HSPA+) is not the same as LTE. In general, LTE has shorter range but enables significantly faster data speeds than plain old 4G (hence its name, Long Term Evolution).

To enable LTE, go to Settings -> Cellular Data Options -> Enable LTE and choose either Data Only or Voice and Data.

Edit: Based on OP's evidence, it seems that on 3 UK, LTE is referred to as 4G, so indeed the status bar will never show "LTE", just "4G", even while on a 4G-LTE network. As long as the speeds hold up to LTE-quality, you're probably getting LTE. This is likely a regional difference, determined by the language on your phone.

Not the answer you're looking for? Browse other questions tagged iphone lte 4g .

3
Is the 3G network used by the iPad the same as the 4G network used by the iPhone?
4
iPhone 5s: Which consumes more battery, 4G, or 4G LTE?
0
Can't connect to mobile internet on iPhone 4s
1
Is there a difference between iPhone LTE band support and carrier compatibility?
1
My iPhone only shows the Wi-Fi symbol even when I'm using data?
0
iPhone 5S, LTE does not work
0
Mobile data connection lost on iPhone 5S
0
New SIM card does not support data traffic in old iPhone