I've got the new MacBook Pro with TouchBar and the new LG 5K monitor. I plug it into the USB port directly (single usb-c port using provided cable).

It looks good but I can't tell if it is really showing 5K. In About/Displays it shows 5K but when I look in the apple display app it looks like it has less resolution then the 4K monitor I have sitting next to it (when I unplug the 4K, the screen resolution does not change even after reboot which I think is to be expected).

My question is, How can I know that my 5K monitor is really working at 5K? is there some kind of 5K test pattern I can look at?

I called apple and they had no idea how to know. Worst support call from apple ever. guy said he had no manager, could not escalate. Told me it's like buying a third party product from Walmart (even though I bought it from the apple store and it was in Tim Cook's keynote) 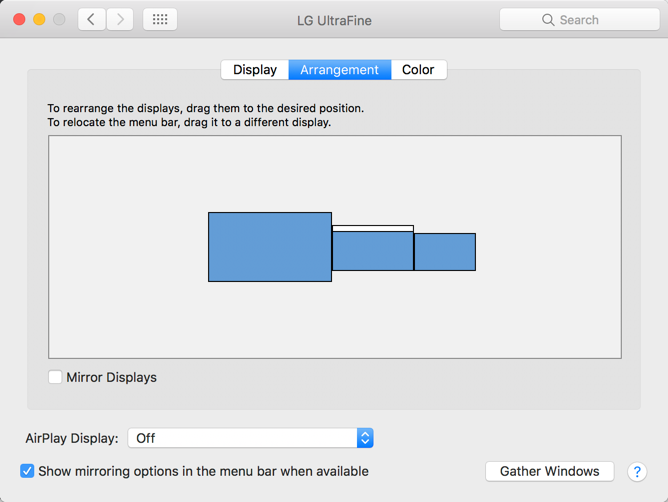 Under the display tab in the screenshot you posted there should be a "Resolution:" option. Click on the "Scaled" option to the right of it and it should show several resolutions, with the one you are currently using highlighted. If the resolution you want is not listed trying hold option and clicking "Scaled" for more options.

Alternatively, if you are comfortable with the command line, the follow command should list the resolutions used on all active monitors: