I would like to start by stating that I am new to this forum, and have never used it before. Patience is appreciated! All greetings aside, I need help with my Mac Mini. I have an early 2007 Mac mini that I have running OS X Lion. (the latest version that it supports) I believe that this system is 64 bit, as per this post: is my mac 64 bit or 32 bit?

The point of this is, I need this Mac to run iMovie 11, as well as the Messages application. Now, I would prefer to stick with Lion, execpt, I truly wouldn't mind 'hacking' this system to run something like Yosemite or El Capitan, because I am thinking of doing this in the near future.

Finally, one more thing. As per the guide I quoted above, I think this mini is 64 bit. The problem is, all of the "run Yosemite" or "Run El Capitan" on unsupported macs all make the use of SFOTT. (sixty four on thirty two)

I have tried the Messages beta app, which apparently is no longer supported, (no suprise there!) and would truly appreciate fast responses to this thread.

Here's a screenshot of the specs on my mini: 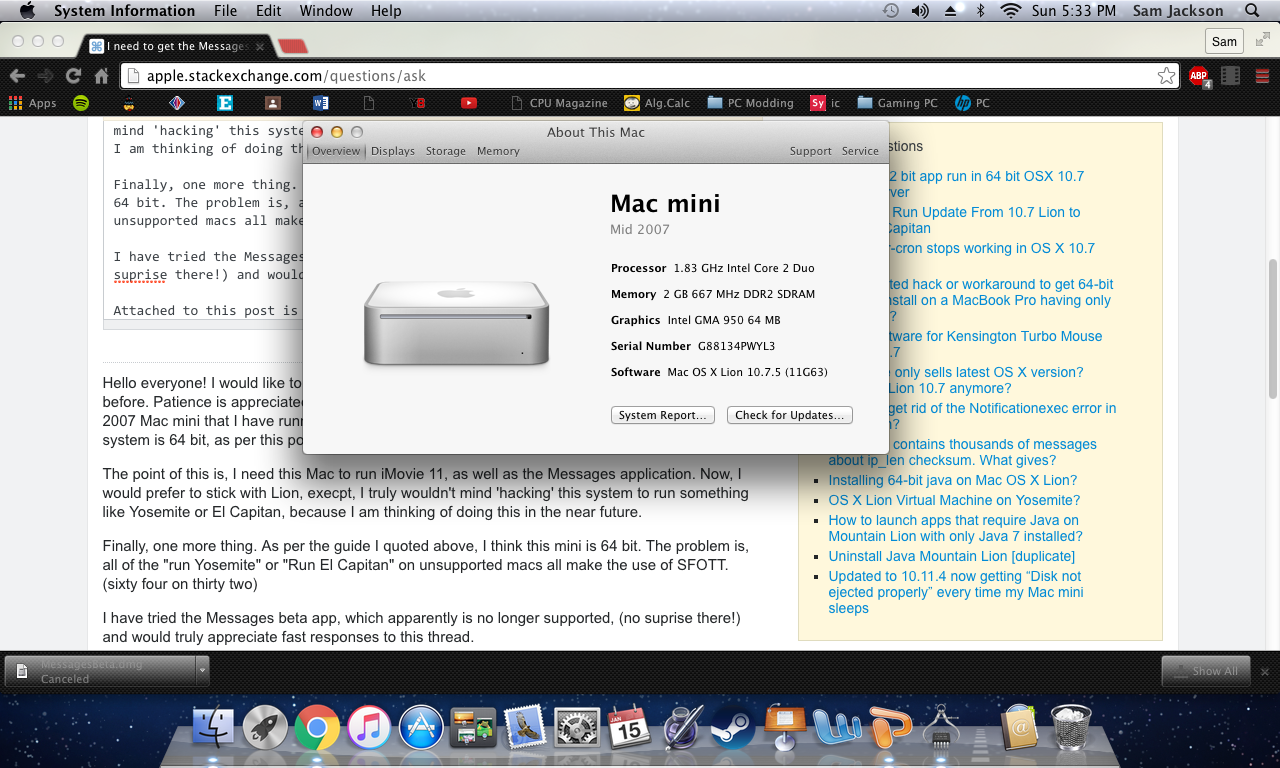 Your question seems to jump around quite a bit and because of that is a little confusing. Below are some answers that may help.

If what you want to know is something different, then please clarify your question.

Not the answer you're looking for? Browse other questions tagged macos messages mac-mini imovie .

5
Intel Mac mini - maximum RAM Upgrade
2
How do I get rid of the Notificationexec error in OS X Lion?
2
LAN Chat via OS X Server — Will Messages App Suffice?
2
Fixing iMessage/Message to not use email address (OSX and iOS)
3
OS X Lion Virtual Machine on Yosemite?
0
Mac Mini Yosemite Install Reboots Back to Mavericks?
16
How can I upgrade to any macOS version that is no longer available in the Apple app store?
0
Upgrading one partition to El Capitan while leaving the other on Mountain Lion
9
Does macOS Mojave (10.14) support 32 - bit Apps?