What is this new voice control thing Siri?

Is it really only for voice control?

Think of Siri as your personal assistant. It listens to your commands, learns from your tasks & contacts & replies to voice commands.

Don't we already have one of those on the previous iPhones?

Well, they're no longer available for the previous iPhone as the app has been taken down. 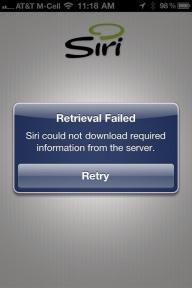 The new, improved Siri was developed after it's acquisition by Apple, so I'm pretty sure they would have added their Patented SecretSauce(tm) and in typical Apple style, the details are a secret.

Not the answer you're looking for? Browse other questions tagged iphone siri .

3
How can I redial using Voice Control or Siri?
2
Is Voice Control still present in Siri supported devices?
3
Siri Voice Feedback Not Functioning on iPhone 6 (iOS 9)
0
Voice Control is launching on its own,also since updating to ios10 there is no menu to turn off Siri between Sounds and Touch id and password
3
How to customize new Siri voice in the Speech of Accessibility?
19
Siri shortcuts voice input