I have two Macbook pro retina's:

The first one is able to pair with the Magic Trackpad (not the "2" - instead the older version).

But the 2012 one has the following behavior:

The initial detection of the trackpad happened several times. 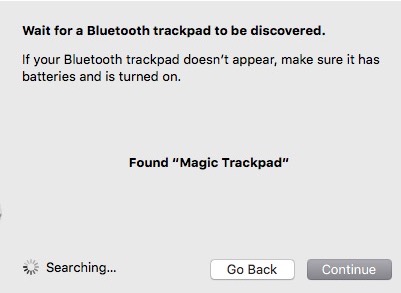 But usually I do not even get that far: the trackpad is simply not detected.

There is obviously no problem with signal or batteries (new): the trackpad works all day on the other MBPro.

What should I look for as potential culprits and fixes?

Just found a related question and answer: apparently the trackpad can only be paired with one mac at a time - even if the other one were powered off (as is the case here)

How can I pair my Magic Trackpad with multiple Macs?

Not the answer you're looking for? Browse other questions tagged macbook-pro bluetooth trackpad magic-trackpad .

18
How can I pair my Magic Trackpad with multiple Macs?