How to recover photos that were deleted during an import from an iPhone to Photos?

Two weeks ago, we had some friends over and one of them wanted to show us some of her photos, so she used my Mac to import them and do a slideshow on the TV. Now she just realized that the photos aren't on her phone anymore, and asked me to send the copies that were on my computer. The problem is that I deleted her photos the next morning, thinking she had them on her phone.

Apparently the Photos app has a tickbox that removes the photos from the phone after the import but nobody payed attention to that setting.

So my question is: is there a chance to recover the photos using a data recovery software? Is there a folder in particular that I should scan?

When images are "deleted" in Photos, they are actually moved to a special album called "Recently Deleted", where they wait for 30 days before they are actually removed from your computer. Assuming you didn't manually clean out this folder after deleting them, you should be able to recover them by navigating to Recently Deleted, selecting the photos, and clicking Recover in the top-right corner.

Here is about where Recently Deleted should appear in the sidebar (it may appear differently depending on what other albums you have): 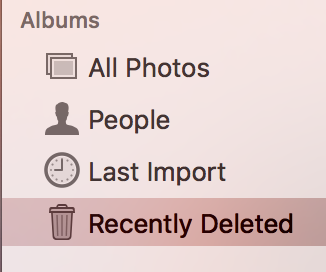 I would first check to see if your friend can log in to the Photos web app for their iCloud account on a modern computer browser. This would let them check quickly for deleted photos album and/or iCloud photo stream for the images in question. There's a 30 day period for deletion there - so get that going quickly.

Next - consider powering off your computer if you are going to try to scan for deleted images. Start with https://www.prosofteng.com/picturerescue-photo-recovery-software/ - the demo is free and they offer great guidance on how to run their product.

enter link description hereIt would not seem that her iPphone/photos are connected to iCloud (specifically, iCloud Photo Library) If they were, Photos would not have let you imported them through traditional plug-in manner. This is due to the fact that the photos are not being really stored on her phone (besides possibly low-res versions) That being said, it does sound like the tick box for "delete items after import" somehow was selected.

My question(s) for you is: Did you not only delete the photos, but also go to the recently deleted folder and dump that as well? The PHOTOS app has a Recently Deleted section in the sidebar where recent deleted photos are stored temporarily for 30 days before they are automatically erased. If you have NOT done so, then the Photos will be in there and they can be recovered by selecting them and clicking the recover button Photos provides.

Option #2 : Does the Mac you are using have a Time Machine backup? If so, you would have an out where you can roll back the system or just the photos one day back before the decision to delete them and they can be recovered that way. I understand the time frame was pretty short of having those particular photos on your computer. You would need a backup that was completed in between putting those pictures on and deleting them. My desktop iMac is always connected to a drive, so it is making hourly backups. If it was a laptop Mac, I understand that chance would be much less likely to have made a backup during that time.

Not the answer you're looking for? Browse other questions tagged macos iphoto data-recovery deleting .

2
iPhone photo download workflow for ONLY new photos onto Mac
2
Missing photos from iPhoto sync in iTunes to iPhone
0
How to recover deleted data from erased hard drive?
10
iPhone 4 water damage - how to recover data?
0
How do I reset link between iPhone and iTunes on a Mac?
5
How to duplicate-check between iPhoto Library and Photos Library *and* move non-duplicates from iPhoto -> Photos?
0
How to convert all photos in iPhoto library to no bigger than 1920x1920 resolution?
1
How to keep iPhone photos synced on Mac?