On my 13" MBP 2015 I'm often getting strange error – Google Chrome tabs all become clean white pages, after several seconds it stops responding and can't be killed via process pid through terminal. When I close Google Chrome window and open it – it doesn't reopen tabs and open white page instead. Other apps get some strange behaviour too – for example I can't open ssh sessions in terminal.

Soft system restart doesn't work – I think it is because of that unkillable process. I'm doing hard restart via on/off button – the black screen stucks and doesn't show an Apple sign, the second restart most of the time launches the os normally.

How can I start to debug this problem?

Whenever I kill Chrome via Force Quit under the Apple symbol on the left corner, it does reopen the chrome pages for me. Although you have to ensure to select the option under Chrome preferences:

Now for the unresponsive Chrome, I would suggest 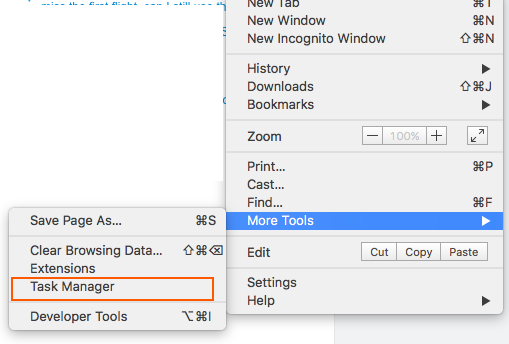 Not the answer you're looking for? Browse other questions tagged google-chrome macos .

10
Internet stops working frequently on OS X Lion
3
Operating System becomes unstable after prolonged use
8
Chrome can't load certain sites but Safari can - how can I diagnose the problem?
2
Why causes Chrome to make my Mac unresponsive?
0
Rebooting a Mac with a frozen application
6
Suspended (tty output) when launching editors like vim, vi, emacs, or nano
0
Unable to open Google Mail via any browser on Macbook Air
1
Grab.app disappearing from dock?