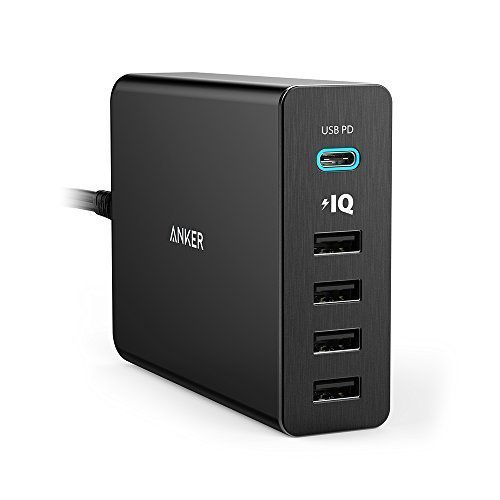 Using a charger with a higher watage rating should also work, but has the potential danger of allowing the device to draw more power than is safe for the device. In this case you would need to trust that the device maker has followed good design process and limits the power that it draws rather than just taking the maximum that the charger can push out.

I own a Macbook Pro 13" (2016) and the Anker charger in the picture. I'm using it right now as a power source. So it works, without setting anything on fire (so far). However, there's an important caveat: The Anker charger DOES NOT deliver the 60 watts the Macbook Pro wants over the USB-C port.

This is important, because it potentially means travelling with just one universal charger for a macbook, iphone, ipad, wireless headphones, etc. -- if you're willing to take a hit on charge time for the macbook.

Here's what I don't know: does the delivery of 45 watts, instead of the optimal 60, have any negative impact on the computer. Specifically, does it a) harm the battery life over time, or b) risk damaging the computer, battery or power source when using the computer under heavy loads (screen at 100%, heavy load on CPU, etc)?

It would be great to see Anker or someone make a similar product delivering 60 watts with 20 volts @ 3 amps (Apple can keep it's extra watt) through the USB-C port. That would solve everything.

Not the answer you're looking for? Browse other questions tagged macbook-pro power .