When trying to order a print product through iPhoto or Photos, the following error code blocks the ability to get to the final step to place an order

The information in the following fields is missing or incomplete: postalCode value '[POSTAL CODE e.g. W9W 9W9]' failed to match any valid regexes.

This happens even with addresses and postal codes that have been previously used for print product orders.

Pressing Fix and changing the postal code to a W9W 9W9, W9W9W9, or W9W-9W9 doesn't work, and neither does trying to use lowercase. (Canadian postal codes are uppercase.)

How can one place an order for print products when this error message appears?

NOTE: iPhoto can no longer submit orders for print products. The solution below only works with the Mac OS X/macOS app Photos.

As posted in these threads, there seems to be an occasional issue with address validation that fails when the letter O follows the letter P (regardless of whether there are other characters between them).

For instance, the address

would be ok, but

That let the process continue and (after pressing Ignore on the suggested address dialog), I was taken to the final Place Order dialog.* On the phone with Apple, they also mentioned the possibility of changing the address even at that final step with the down arrow indicated in the image: 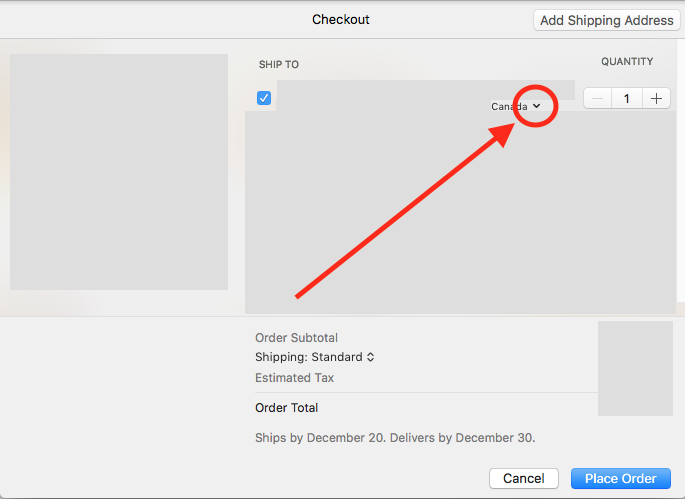 Photos froze sometimes, especially at the suggested address dialog (the one where you press Ignore), so this may take a couple of tries.

*There's a chance that you might be able to successfully place the order here, avoiding the final address change. Your postal code, combined with the (hopefully similar-enough-to-the-real-one) street address should be enough for the postal service to figure out the phony city and province. However, since print products aren't cheap, you may not want to take that risk.

Not the answer you're looking for? Browse other questions tagged photos iphoto printing .

2
Ordering of events when printing/pdf-ing from iCal
4
Can't print in fast / draft when connected to printer over wifi, but can when connected via usb
0
Word attachment file name prints as icon with ? inside when I print email
2
How can I change print quality and print profile settings when using Airprint?
0
MBP freezes when I print
0
Photos crashing when uploading print order
0
How do I print on mac, when needing a printer administrator
1
Why do fields turn black when using Preview to duplicate or print some pdfs?