What's the best way of connecting two Dell P2415Q 4k displays to the MacBook Pro 2016 with TouchBar and TouchID?

I have the monitors connected to an older MacBook Pro currently with two mini-DisplayPort cables. Can I somehow reuse those cables or do I need new ones?

So I guess reusing the cables is not the way to go?

I use Google branded USB Type-C to DisplayPort cable with a different model of 4K monitor. Using it, my late 2016 MacBook Pro drives the monitor at full 3840x2160 at 60Hz. No problems. If you can get that adapter, it simply works. I'd assume any other USB Type-C to DisplayPort 1.2 adapter rated to support 4K monitors at 60Hz should work too. The Apple branded adapter will not work at all, because it is not DisplayPort adapter. It is only Thunderbolt 3 to Thunderbolt 2 adapter, if you need to connect an older device (such as RAID box).

If you want to connect two 4K monitors, you'd probably need two of those adapters. Daisy chaining two 4K monitors using DisplayPort (connecting to first monitor via adapter, then connect monitors to each other via DisplayPort cable) won't work well in general and won't work at all with Macs. AFAICT, DisplayPort 1.2 does not have enough bandwidth to drive two 4K monitors at 60Hz out of a single port, so daisy chaining type of configuration would work at only 30Hz refresh rate if it works at all. You'll find this documented in the manual for P2415Q. Additionally, Apple only supports daisy chaining Thunderbolt monitors, but not DisplayPort monitors (if you search Apple support forums, you'll find this info). Daisy chaining DisplayPort monitors works only with Windows (and probably Linux?). But due to low refresh rate (only 30Hz) you shouldn't do it with 4K monitors even if it worked with Macs. To drive both monitors at 4K at 60Hz you will need to connect each monitor directly to your computer (PC or Mac) using cable or adapter. I have not tested this with the new (late 2016) MacBook Pro myself, but in theory connecting each monitor to a separate output on the MacBook Pro should work.

While at the topic, DisplayPort 1.2 does not have enough bandwidth to drive single 5K monitor at 60Hz either. All 5K monitors (all 3 or 4 of them), such as HP Z27q, use two DisplayPort cables to connect to computer (Mac Pro supports this dual-cabling of single monitor, not sure about MacBook Pro). I've no idea if you can drive one of those 5K monitors that require dual-cabling using two USB Type-C to DisplayPort adapters.

The only 5K monitor I know of currently that you can connect to anything using single cable is the flawed LG UltraFine 5K monitor, because it uses Thunderbolt 3 (not DisplayPort). But you don't want that monitor either. It has more flaws than you can shake a stick at; if you read reviews for it over at Apple's website, they are less than stellar. It's a shame, since in theory you could drive the monitor, charge your laptop and access USB hub in the monitor, all through single USB Type-C (well, Thunderbolt 3 really) port on your laptop.

The 24" P2415Q (and other 21" to 24" 4K monitors) should probably be fine choice for a 4K monitor. I'd expect about retina-quality image. Would be definitely interested to hear back if you get that monitor. Make sure to set it to 2x scaling in Display Preferences (when you click "scaled", select setting where it says "looks like 1920x1080", that's half of 4K native horizontal and vertical resolution, i.e. scaled 2x). You can see this in this video over at Youtube. This will give you text size (fonts) and everything else about as you would expect on 24" display (which are all generally 1920x1080, surprise, surprise). Except there should be no visible pixels, should be perfect smooth, like on displays Apple brands as "retina". You'll also see in the video a performance warning when he hovers over other scaling options that are not equivalent of 2x or 1x scaling (referenced below for 27" and 32" 4K monitors).

For any larger monitor (27" or 32") 4K is less than ideal (I'm using one of those currently). You'd need to set scaling to 1.5x ("feels like 2560x1600" or "2560x1440") to get things correctly scaled. Anything less and text will be too tiny, anything more and text will be way too large. The image on the screen will look way better than "normal" (non-4K) monitor of the same size. However with 1.5x scaling the performance may suffer as graphics hardware will have to work extra hard (in display preferences, you'll be warned when you chose that setting). Ideally you want to go 5K with 27" and 32" monitors, so that you can set scaling to 2x. That's why all "retina" 27" displays are 5K. Unfortunately, the only 5K displays out there are the flawed 27" LG UltraFine 5K (connects via single Thunderbolt 3 cable) and 2 or 3 models from couple other manufacturers that require connection via two DisplayPort cables. I so wished more 5K models would be announced at CES. Disappointed. Plus Dell discontinued the only 5K monitor they had.

In short, 4K on 27" and 32" monitors is neither here nor there. It's a compromise. With 1.5x scaling, it's still nicer looking text and graphics than regular monitors. But because of 1.5x scaling performance may suffer. Depending what you end up using monitor for, it may be good compromise, or not.

A general rule of thumb in tech (and for many areas in everyday life) is reduce complexity to increase reliability. The best (IMO) solution would be to go from native DisplayPort to DisplayPort.

The Thunderbolt ports on the MacBook Pro actual have DisplayPort as a native signal (on a type C connector), so this Cable Matters USB-C to DisplayPort 4K should fit the bill. 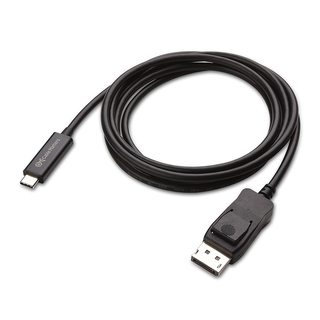 -1
How could the new MacBook Pro connect to a external display?