I have an 16G iPhone 5s with iOS 10.1 that is very quickly eating up space to "Zero KB". When checked in "Manage Storage" the apps definately doesn't add up to 11.9 GB.

When I try to remove some of largest apps, free space appears but shortly after is back to "Zero KB".

When connected to iTunes Audio + Photos + Apps + Documents & Data + Other + Free adds up to less than 7GB only.

Has anybody experienced anything similar or has any clue about where to look for a solution?

Edit 2: I tried to delete some of recently updated apps to see if anyone of the could be causing the issues. The apps were: Pokemon Go, Hooks, Skype, 9GAG, Twitter, JIRA Cloud, Audible, Endomondo, Netflix, Google maps, Instagram, Taxify. It looks as uninstalling an reinstalling them might have restored small part of the lost storage space, but definately not all. Will continue to investigate and report 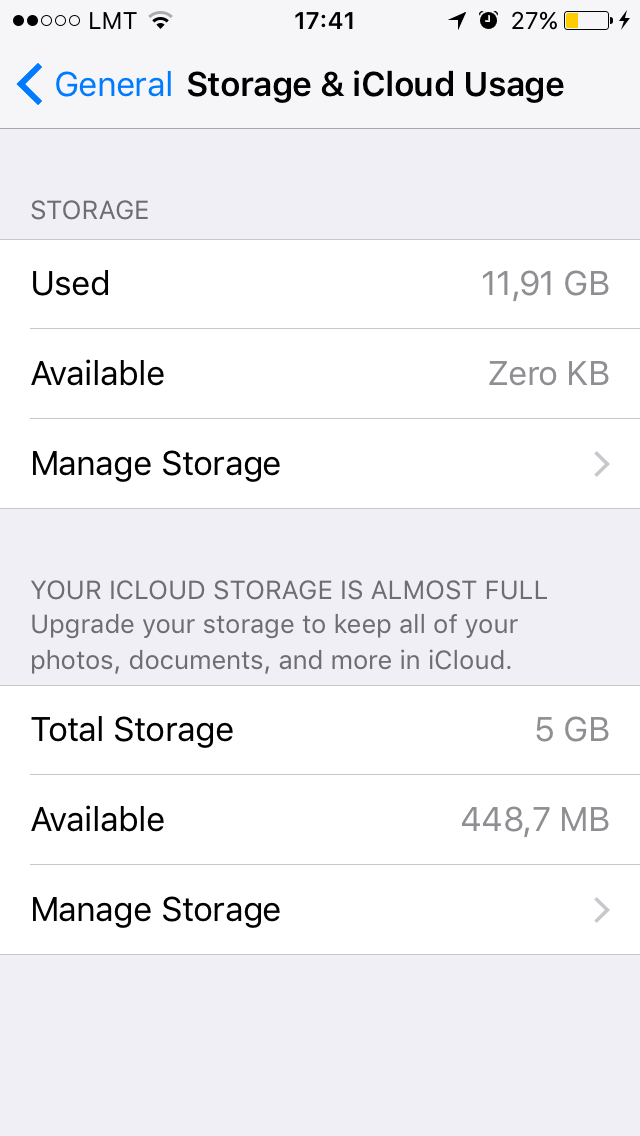 Still I was always back at "Zero KB" of available internal storage.

But when I connected the phone to iTunes (which I rarely do) to get the storage allocation by category I noticed most of the sapce was getting eaten up by the Other category has reached 9.7GB (out of 16GB theoretical capacity).

I also got the prompt saying an update to 10.1.1 was available but it couldn't update anyways as 600MB of free space was needed. I started thinking I had a bad update on my phone or corrupted iOS.

I found this article on the Apple Support page https://discussions.apple.com/thread/7467540?language=en said I might need to clear all data/settings then restore from a backup if the Other category is taking more than 2GB of space.

I followed this process https://support.apple.com/en-us/HT201274 to clear everything and restore from an iTunes backup.

After restoring the backup and reinstalling the 10.1.1 update I now had 9,54GB of available storage.

I've similar issue on my iPad mini 2 for quite a while. I'm not sure what caused it, but have read that iOS would free spaces when needed. That means, the free space we see in the settings is actually not accurate. There are some disk cleaning apps and should "force" iOS free the spaces. I am using an app called "memory & disk scanner pro", and it can do the job. You may try it or some other similar apps.

Not the answer you're looking for? Browse other questions tagged iphone storage ios .