The system I started with:

The system I currently have (only changes listed):

(Memory is OWC Memory Upgrade)
(HDD is From Seagate)

The System I want

I'm not as impressed with the HDD as I thought I would be. It is way better, but it is also way more than I need. I have just under 40GB of consumed storage on my system (i.e. currently 3.96TB available), so with the 120GB I can make a 60GB partition for the entire system (startup, apps, files), and another 60GB partition for another drive (storage, OS, whatever). The 4TB HDD will be for deep storage, should I ever need it.

I am confident the GPU upgrade will work. Apple also has technical specs stating that the graphics are "Configurable to AMD Radeon HD 6970M with 2GB GDDR5".

The processor is where I'm having trouble. Hardware is not my schtick, and there are endless feeds talking about various processors, and whether or not they work.

One person might say that "You can only use an i7 core Apple offers as a OEM upgrade or you'll have firmware problems."

Another person might say that "they're using a "regluar i7-2600" and having no problems.

But which is it!? Will any old processor do?

From there, I've narrowed it down to five Intel Core i7 Processors (all five compared on same page after links):

But from here, I really don't know what any of it means. Bigger numbers often mean better (more cores, higher processor frequency, more memory, faster speeds, etc), but this isn't always the case.

They are all within 0.2GHz, which is hardly noticeable or worth splitting hairs over. Same number of cores. Same cache. Same max memory. Same package (ignoring FCLGA1155 from LGA1155). And the rest is basically identical between them, with the occasional differences that I likely don't understand.

One standout difference for the 3770 series are that they both have lower Thermal Design Power, which will help with internal cooling and fan noise. BUT, the same series is also the only one without Intel Fast Memory Access, which sounds pretty great!

On top of not being able to adequately differentiate them, I wouldn't know if any of these processors is/is not compatible with the graphics card and other components I've set up, or if they'll sun with my current OS.

Just to recap, the hardware:

I've read multiple successes for getting non-Apple processors to work by deleting AppleHWSensor.kext. Maybe this won't even be required.

Can You Help Me? 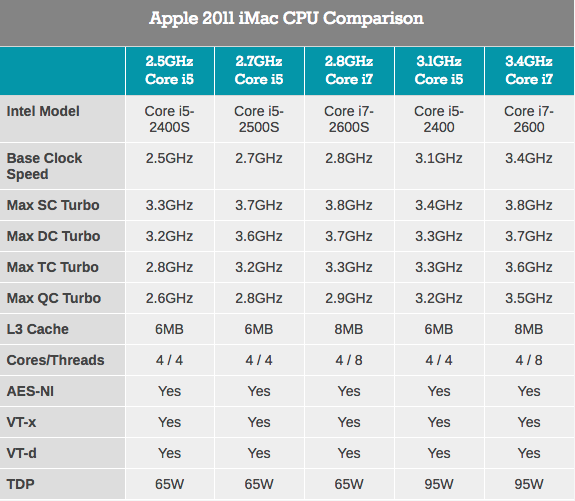 1. How to choose a compatible CPU?

The basic rule is to use what Apple uses in different iMac models:

As shown above, these are the five CPUs that iMac 2011 uses in different models.

According to your question, your current CPU is Core i5-2500S@2.7Ghz. So, in order to prevent possible compatibility problems, we have three options: (In Socket1155 CPU)

Suggestion: Now as you want an upgrade, i7-2600S is the best choice in both relatively lower price and enhanced performance.

First: K represents "unlocked" and "Overclock", which enhances the performance of CPU and requires motherboard support as well. I think you don't have the need to overclock CPU.

Second: find some questions on changing CPUs with K processors, some of these questions report system problems.

3. How to really boost your system?

Changing the CPU might matter. But as I have been using both i7-2600 and i7-3770, I cannot tell their difference when using iMac except that you have tasks bringing heavy load on CPU.

Changing to the SSD is what can really boost your system. Actually, poor speed of regular HDD is the cause of poor system performance.

Not the answer you're looking for? Browse other questions tagged hard-drive imac ssd memory cpu .