Example 1: Chat apps still get notifications if they are in the "not running" program state. How do they do this?

Example 2: If I'm saving a note (with background app refresh off), and I return to the homescreen before the note is finished saving, will it continue to save?

From the iOS docs, the app life cycle is pictured below. 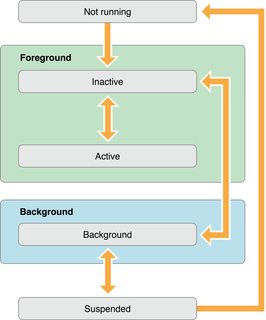 Background App Refresh (BAR) =/= "Background" as shown in that diagram:

Background Execution is generally only allowed if an app has not been force-quit by the user (the exception being "location apps"). Apps in any state, including Terminated, can use Background Execution if they meet the requirements below. If necessary, they will be relaunched by the system into the background (again, subject to the force-quit limitations above). See my answer on a similar question:

There is one other case, which is downloading in the background. This is a special case, though, because the app itself is still suspended and the download process is handed off to the system, in case the app has to be terminated by the system to reclaim resources.

What's not in the linked answer is notifications. Non-local notifications are generated on a server somewhere and pushed to the device via Apple Push Notifications (APN). The act of receiving a notification does not indicate the app itself did anything.

In your note example, when the note app transitions to the background, it is given a brief amount of time to save state. If it's in the process of doing something like saving a note, and it cannot complete it in the time allowed, it can ask for an extension, essentially, and then notify the system when it's done so the app can be suspended. This type of background work can be used by any app, not just those that fall under the categories listed above.

Not the answer you're looking for? Browse other questions tagged ios multitasking .

1
Apps not working properly in background
1
How often do Background App Refreshes occur in iOS 7?