Use Macbook Pro's single audio jack for both input and output at the same time?

Basically, the Macbook Pro 13inch (early 2011) has only one audio jack, but I need two.

This worked perfectly fine when I used my netbook. However, now I would like to use my macbook, but it has only one jack, so I can't plug both the piano and the headphones in.

Is there some kind of a splitter I could use so that I can plug in both at the same time? I found some threads online, such as this one, but some of the posts seem contradictory, so I thought I'd post here.

I would also welcome any answers that could explain the rationale Apple used for not including a second jack. Please do not use size as an argument; 10 inch netbooks fit 2 jacks just fine.

Yes - the good splitters mix the pins correctly to provide mono microphone and stereo output in the same jack. You can of course get breakout boxes like the Griffin iMic and have the benefit of a cleaner D/A circuit at the expense of carrying another device that's plugged into USB. Just like everything - some of the expensive products are over priced and some of the cheap ones are worthless. I'd go with a name brand - especially if their products are carried on the Apple Online or stocked in the retail stores.

Lion does add a control where you can select the speaker icon in the menu and switch from input and output.

As to the rationale - unless an engineer from Apple steps up, we'll have to speculate.

Here are the reasons to have fewer ports. (They're not al good, but they are reasons)

This lack of space likely cuts features from the smaller macs like a redundant mini headphone port. 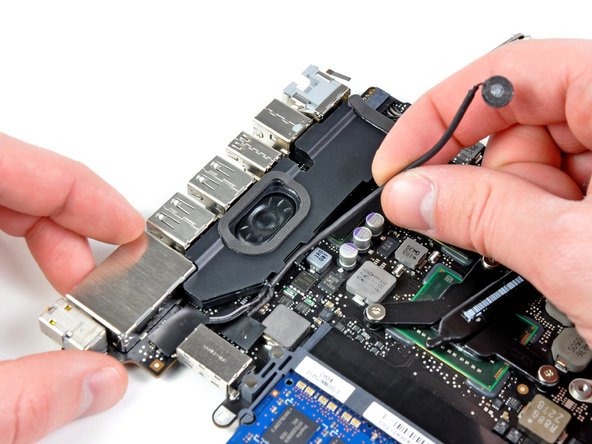 It is a size issue :). If you look at the system board vs the cavity for the battery and hard drive, you'll see they couldn't fit it. What I'd do is get some sort of USB sound card such as these at newegg.com (just an example, not plugging newegg.com http://www.newegg.com/Product/ProductList.aspx?Submit=ENE&Depa=0&Order=BESTMATCH&Description=usb%20sound%20card%20mac&IsRelated=1&cm_sp=KeywordRelated-_-usb_sound_card-_-usb%20sound%20card%20mac

Not the answer you're looking for? Browse other questions tagged macbook-pro audio .

12
Are there headset adapters usable for MacBook Pros?
2
How to use a wired headphone AND a mic at the same time on the Macbook Pro Retina?
4
Audio input/output splitter for MacBooks without changeable input/output jack?
2
Using the same audio input on multiple devices, recording iOS video
0
Route USB mic input to System Audio output for Camtasia 2?
1
How to prevent iTunes/QuickTime Player playing both the main (5.1 AC-3) and backup (2.0 AAC) audio tracks at the same time?
1
How to plug into Mac Air a 4pin Microphone with 4pin headphones through a splitter?