Very strange issue here. Around the time the 5s came out I went into AT&T to grab a new phone. For some reason I couldn't get logged into my apple account during setup so the AT&T employee completed the activation while using their account.

Ever since then when I did factory resets and after I entered my own apple credentials it would always ask me to log in with their account as well. Didn't bother me too much and I figured it was something particular to the phone.

However, I just bought a new 7 and the same issue has come up! After I log in with my account it asks me to log in with this strangers account. Obviously the accounts are linked in some fashion but I've checked every single account setting I can and I have no idea how this could have happened.

Anyone have any ideas?

Edit: It's not a used phone, but were new out of the box at AT&T. Also, doesn't sounds like it's an activation lock because it has followed me across phones. Definitely seems like an iTunes/Apple ID account issue.

Here's the popup that shows up right after a restore and when I open various apps following a restore. For what it's worth, this appears to be their personal email and not a corporate email: 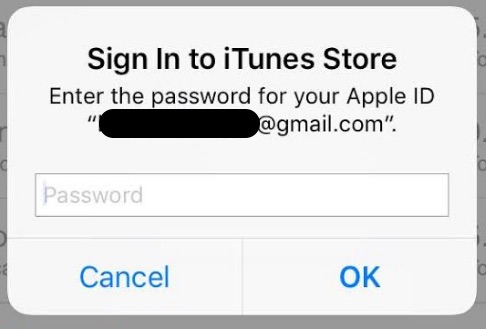 This sounds like Activation Lock (Find My iPhone). That's a bummer, they shouldn't have signed in like that. If this is a new device I'd take it back and get another one, personally. Don't have them setup your phone afterwards.

If you don't want to return it, you'll need that Apple ID account name and password in order to complete setting it up and then signing out of iCloud to turn off Find My iPhone.

Not the answer you're looking for? Browse other questions tagged ios ios-appstore apple-id .

4
App Store asking for credentials?
4
App Store on iOS keeps asking for another user's iTunes credentials
0
Why won't my restored iPhone 4S accept my Apple ID credentials?
2
Refurbished phone prompts me for previous owner's password
2
Apple Store Purchase history
0
Apple ID for enterprise use - Mac's and iOS devices
2
Are former employees able to remotely wipe my Macbooks after they left the company?
2
Is it possible to have an app meant both for internal employees and external public in the App Store?
1
Does restoring a local backup using iTunes enable activation lock?