I tried waking it up by opening the lid, no display (absolutely, not even a black screen), unresponsive keyboard, I tried turning it on using the power button, I had to press it (and hold it) many times before it responded (finally), showing a message in multiple languages in the likes of Your computer was shut down because of a problem, and when I logged on this dialog box appeared: 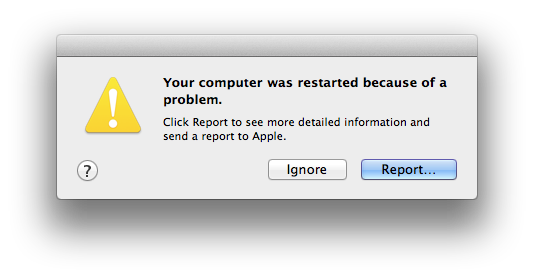 ("shut down" instead of "restarted", this picture was found on web)

Everything works just fine after the occurence of this SCARY problem.

I use two (famous) software that that require disabled SIP: SwitchResX and Karabiner.

what syslog | grep shutdown had to say about the issue :

[This answer not complete until this sentence removed]

Troubleshooting is a process of elimination and can take a while to identify the root cause of a problem.

Here are some steps to get you started.

The steps for resetting the SMC on your particular MacBook are:

Since this problem seems to be intermittent, it may take a while to know whether the reset has resolved it or not.

Another thing you can also do is test your hardware. Depending on the year of your Retina 13" MacBook, this can be done by using either Apple Diagnostics or Apple Hardware Test.

One you've checked out the links, follow the steps for the one suited to your model and share your results.

Not the answer you're looking for? Browse other questions tagged macbook-pro macos sleep-wake kernel-panic .