How do I force send a text message in iOS 10?

When I'm out of the country and don't have wifi or data and I want to send a text message to another iPhone back in the UK, it won't let me send a standard text message . It wants me to send an iMessage as it recognizes I'm sending to another iPhone , but I do not have any data allowance or wifi so it won't let me send an iMessage anyway, and I can't find a way for forcing it to send a text SMS message.

I've looked in settings and turned off my iMessage, and the option to send text SMS only is not there anymore. I used to be able to do this before iOS 10. Is there a way I can send a standard text?

I just verified that this works in iOS 10.

A message from Apple Support Chat:

I checked with a few resources on this and it seems that the feature is no longer available in iOS 10 to be able to chose how to send a message. We would still have the option to turn on Send as SMS which will automatically send a message that wasn’t able to be delivered as an iMessage before.

You can, press and hold the unsent iMessage and a menu will pop up with the option

On iOS 13.0: enable „send as SMS“ in Settings / Messages. Then send a message to your party by pressing the blue send arrow.

It's still possible, but you have to send message to phone number instead apple ID (like email address). After enabling Send as SMS in Settings -> Messages of course.

It works exactly how it used to work in iOS 9, but crucial is sending message to phone number. 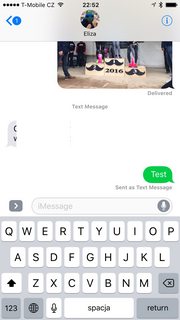 Note you can also turn off cellular data (and Wi-Fi) before sending a text and the OS will send using SMS (assuming you have a phone signal) and turn it back on afterwards.

It's a bit annoying if you have to do it a lot but turning on and off iMessage is more annoying as it has to reactivate each time you want to turn it back on.

You can go in Settings > Messages > Send as SMS

If you turn off iMessage off on Preferences > Messages, all messages come out as Text Messages; that is why the "Send as SMS" option is no longer present.

I just encountered this issue and I’m on ios 12.2. Sprint is my carrier. I had tried all of the solutions above before finding this page. None of them work. I spent a few hours chatting with both sprint tech support and sprint worldwide support (via a WiFi connection). After giving up trying to find a resolution to the sms issue, they informed me that my plan included free data roaming. (I hope to God that’s actually true because i know it didn’t used to be.)

Anyway, I don’t know why I could send sms messages to my parents from Mexico to the US, but not to my wife here with me in Mexico. Every time I tried to send her a text, regardless of the iMessage and Send as SMS settings, I would get an error stating: 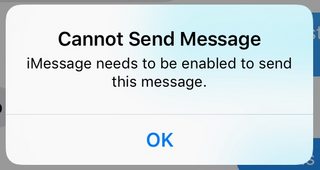 I.e. I tried iMessage on and off and send as sms on and off.

Incidentally, even though I had no icon indicating a data connection, I was receiving sporadic connectivity such as app notifications for emails and other communications but whenever I tried to use an app, I would get an error saying I wasn’t connected to the internet, such as:

Also, while I was able to call my parents, every attempt to call sprint via their 888 number immediately “call failed”.

Other things I tried: I made sure that I was sending messages to my wife’s phone number and not her iCloud address. I tried changing the phone type in contacts from iPhone to mobile. I tried adding 1 in front of her number. I also tried adding + in front of the 1. I tried turning off automatic cellular network selecrion and switching networks manually (settings->cellular->network selecrion->automatic).

Finally I discovered a workaround. You can send sms messages to google voice numbers and luckily, both my wife and I have google voice numbers. I had forwarding turned off on my GV account, so I had to turn it back on in order to receive, since using the GV app requires a data connection.

For anyone who tries to look for an actual solution, instead of a work-around, please note, every time you test a solution above, you have to make sure WiFi is off. Note also that Apple disabled the option to tap and hold a message to send as sms. It’s supposed to work automatically if you enable send as sms, but that only works if you have iMessage enabled and there appears to be a bug where if you turn iMessage off and try to message someone whom you’ve imessaged before, it refuses to send an sms in some cases. It converted to sms when I messaged my parents even though the thread had been iMessages up to that point, so I’m not sure what other circumstances are needed to encounter the bug. It could have to do with the location of the recipient, whether it’s a group thread or not, or... it’s anyone’s guess.

1
How can I send message as Text Message on purpose?

0
Selectively force Siri to send SMS instead of iMessage
5
How to selectively force Siri to send iMessage instead of SMS?
1
Text Stuck in Message Field
1
How can I send message as Text Message on purpose?
0
Messages to another iphone sometimes green, sometimes green with 'sent as text message'
3
Suddenly unable to send SMS from macOS (names marked RED)
12
How do I send text messages (NOT iMessages) from my Mac?