Screenshots getting piled up in the folder on Sierra

When using Yosemite and El Capitan, I set up a folder where screenshots are sent by default. Once screenshots were taken, they'd be added to the bottom of the folder, all in a grid and such.

Ever since I upgraded to Sierra, however, the screenshots, even though sent to the right folder, are put in some random position in it. As a result, they get piled up on top of other screenshots that were already there. Is there anyway of fixing this? What could be causing it?

I realized this is happening on all of my folders, not just the screenshots one. Whenever I used to add new stuff to a folder, it'd get sent to the bottom on that folder, and now it gets piled up on top of the item on the left side of the fifth row (the bottom-most row on the window before I resize or maximize it).

You need to set your folder to Arrange by some criterion - name, date etc

Select the open window, then View Menu > Arrange by > 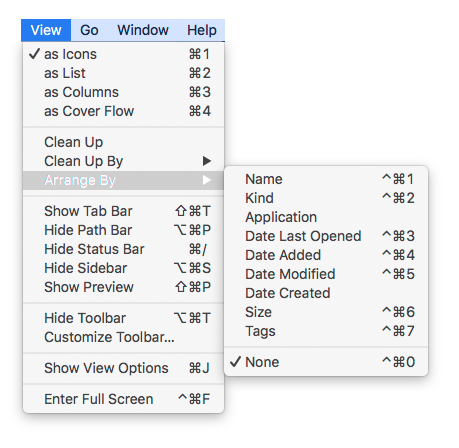 Alternatively, use Clean Up By to sort them once, then Cmd ⌘ J to get the Folder Options, select elect Arrange By None & Sort by > Snap to Grid.

Not the answer you're looking for? Browse other questions tagged finder screen-capture sierra .