I'm a visual thinker. I prefer seeing everything laid out clearly and then moving around a big layout. With screen zoom, I can quickly zoom in-and-out on parts of the screen. Right now, if I tile windows, then zooming in on a corner of the screen just makes everything about that window look big (e.g. every pixel is expanded, so fonts look bigger, icons look bigger, etc.). But what if I wanted to do the symmetric movement in the opposite direction: make it so that when the screen is zoomed, things look normal, and when the screen is unzoomed, they look small? So even with limited total screen resolution, I can imagine a screen dimension setting that "fakes" a higher resolution than the screen can actually achieve, then only displays at the correct resolution after zooming in.

I am looking for a hack or app or suggestion as to how I might do this. For example, say I want to tile applications like this:

where each Screen is itself a full-resolution screen. So for example if I zoomed in on any corner (upper right, for example) to see the applications in that area of the screen, they would appear at the normal, native, full resolution. If I zoomed back out, I would see all the applications, but they would look small and fuzzy, small because the screen would behave as though its physical area were 4x its actual area, and fuzzy because presumably it wouldn't have the resolution to handle that well.

This idea may seem similar to the old rectangular spaces layout, 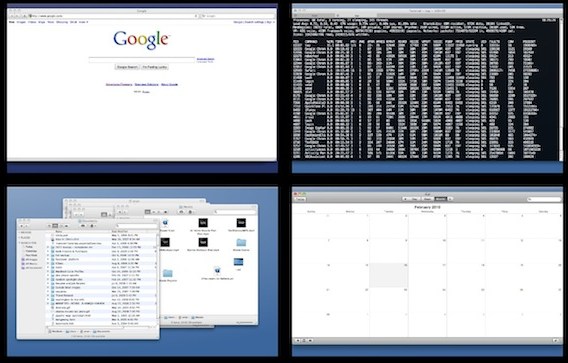 except that I really don't want anything to do with spaces, switching spaces, etc. I just want one big screen tiled with application windows that can look "zoomed out" from a distance.

Apologies if this question does not make sense as written; I am trying to explain a somewhat unusual idea and am not sure how best to convey it.

4
How do I resize all my windows when I switch displays?
3
Thunderbolt 27" resolution
33
Windows Get Stuck in Top Left corner after upgrading to Mavericks
2
How to bump up text size & other graphical elements system wide
1
What are the variables needed to access focus properties in split screen view?
1
Zoom content not screen with Magic Mouse