The update to macOS Sierra wrecked scrolling with my Logitech Mouse (which uses Logitech Control Center).

The scrolling behaviour is erratic because I'm actually assaulted by two issues:

Sierra just came out, but I'm not that hopeful that Logitech are capable of tending to issues like these, so I'm afraid I will have to do something about it myself.

Edit, Broken Mouse Buttons: Also related to this, is the issue that the Forward/Back buttons on some Logitech mice have stopped working. I was able to mitigate this issue by binding those buttons to keystrokes in Logitech Control Center, e.g. (⌘ + ←) and (⌘ + →) for Google Chrome. Possibly, something like BetterTouchTool, Steermouse, or USB Overdrive could be used to intercept the OS functions Forward/Back in case the keyboard shortcuts above aren't global for all applications. Regardless, with BetterTouchTool, you can set application-specific keystrokes and bind them to mouse buttons.

The 3.9.5 version, published on Sep 22, 2016 by Logitech solves most of the issues. The scroll is smooth again in Chrome. Unfortunately the inertia is still a bit high in native apps like XCode, but not as bad as before I guess.

Until Logitech fixes their drivers, I can confirm that using USB Overdrive is a viable workaround for the single-line scrolling issue on Mac OS Sierra using Logitech Gaming Software for Mac v8.87.92. I have not tested it with Logitech Control Center since my G700 mouse does not work with LCC.

What's interesting is that I have both LGS and USB Overdrive installed together, and all my mouse bindings in LGS continue to work correctly. I have USB Overdrive configured for "G700 Laser Mouse, Any Application" and under "Advanced Options" I chose "Configure Missing Buttons to do Nothing". I then configured Wheel Up and Wheel Down for "Scroll" using speed "Accelerated" (I also tested "1 Page", "1 line", "2 lines" etc) and it works correctly.

I now can scroll one line at a time using the mouse wheel in all my applications.

Smooze helped me get rid of all annoyances, after several months of problems. After having tried some common suggestions like USB Overdrive and SteerMouse to no results, I tried this new app which also appears to be actively developed with new updates at the time of this post.

I found that Smooze was able to create the scrolling behaviour I like – which is non-smoothed linear scrolling with no acceleration curves. It also provides very customizable settings for those who likes smoothing, with different curve selections and speeds.

The paid version includes some additional features, like cursor gesture shortcuts, but I think you can solve the issues with the free version.

Note: If you're planning to use this app, you should uninstall Logitech Control Center or it might not work as you'd like. If you're dependent on LCC for special buttons like the Thumb Button and so forth, I recommend that you get something like BetterTouchTool and create custom bindings instead.

MacOS 10.12.2 fixes the Smooth Scrolling inertia issues with and without LCC 3.9.5 installed.

Unfortunately, with LCC 3.9.5 installed on 10.12.2, there is an issue with highlighting text and scrolling, where the highlighted text loses its focus. There's a separate SE post for this issue.

The scroll works fine without LCC and the only thing that was missing was the mouse button actions (back/forward and wheel left/right), but that was easily fixed using BetterTouchTools.

This is a problem with more than Logitech mice. I had this problem with an old, generic Dell USB mouse as well.

It's odd - that's the experience I had after upgrading to Yosemite several years ago with my Performance Mouse MX – I'm surprised you had it working past that point!

For me, the best solution (though it did not perfectly mimic the previous behavior) was to install BetterTouchTool and use the "advanced" configuration options to get it to mimic the inertia and acceleration of the original behavior (in a way that playing around with the default OS X settings was unable to accomplish). Here's a screenshot of that dialog (not configured): 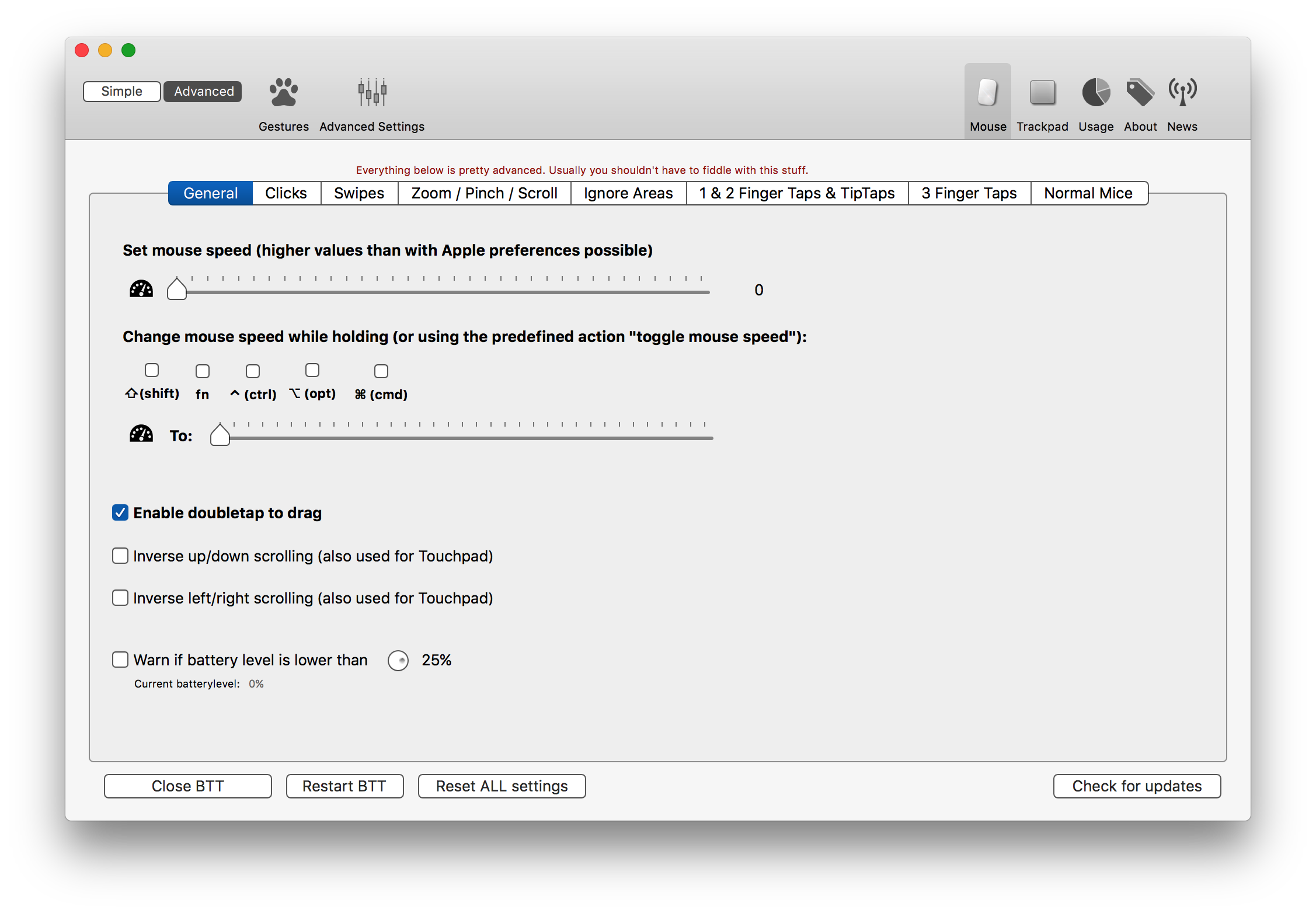 I tried installing new & old versions of the OS X Logitech drivers and control panel to no avail; a few months later, I ended up switching to a combination wired/BT Razor mouse instead (even though I don't game) just to experiment with this issue and discovered it only affected/plagued Logitech mice..

Not the answer you're looking for? Browse other questions tagged mouse scrolling macos .

4
How do I use my Logitech G9x mouse on Mac OS X Lion?
7
Configure center mouse button to open new links
2
Is there an OSX workaround to configure a "unifying" receiver without Logitech's control center?
2
How to reset Logitech mouse's back/forward buttons?
3
Scroll button on Logitech mouse won't left/right "click"
10
Adjust horizontal scrolling speed on a mouse or trackpad independent of the vertical speed
1
[Sierra]: Mouse scroll
1
Logitech Mouse (and mice) - unable to scroll up on Mac