Is there a way to Reindex/"Reinstall" AirPlay Devices in OS X?

I'm using Airfoil as a way to broadcast my iMac as an AirPlay device on my home network. This utility does, besides creating an "Airfoil" server, also create an actual AirPlay device that can be seen under System Settings > Sound and by Opt–clicking the Sound/Volume icon in the OS X menu bar.

For some reason, the Airfoil AirPlay device (reachable in the below menu) has suddenly stopped working. When trying to send audio to it from my other Mac, I get the system pop-up "Could not connect to xxx-Airfoil". 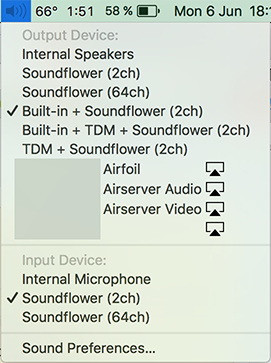 (Ignore the current checkmarks in this image. It's the "Airfoil" AirPlay device I'm trying to access)

However, when using the Airfoil application menu directly to access the computer via the Airfoil service (not AirPlay in the audio output tab), audio transmission works as intended. So my conclusion is that there is something wrong with what/how OS X "knows" about the AirPlay device.

Question: Is there a way to get OS X to "reindex"/reinstall the available Airplay Devices?

I've tried reinstalling Airfoil and its sister-application Airfoil Satellite, and also tried rebooting the computers. Not sure why it suddently has stopped working – I'm still on El Capitan.

Typically when I see issues with AirPlay, particularly when you've taken the troubleshooting steps that you have already, it is a network issue and not a software issue.

So here are a few things to try/verify:

Not the answer you're looking for? Browse other questions tagged macos network audio airplay .

3
Airplay Quality Issue From MacBook Pro
0
Make iOS devices by default connect to external audio sources (Airplay/Bluetooth)?
1
Can I connect to any AirPlay device from the WatchOS 3 Control Center?
0
MacBook not out-putting sound to Bluetooth devices
2
Bluetooth audio devices stop working after a few minutes
1
Unable to use Audio Midi Setup to use two audio outputs
1
Can't connect bluetooth devices without restarting after laptop has been on for some time