I've noticed that when an application, such as iChat or Twitter for Mac, sends a link to Safari it opens in a new window rather than a new tab. I can manually force it to open in a new tab by holding down cmd, but I'd like this to happen automatically. I don't recall links opening in new windows in Snow Leopard.

To be clear, I'm not talking about opening links within Safari itself, I've set these to open in new tabs already. I'm talking about external applications sending links to Safari.

In Safari > Preferences > Tabs, there's a preference for setting when pages should open in windows or tabs. 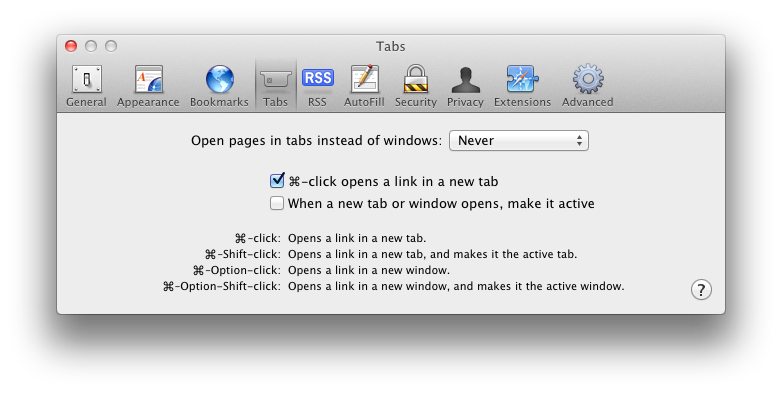 This will force every application to open links in tabs.

So this is strange - I just got this to work.

In the above window I set "Open pages in tabs instead of windows: Always" and then I unchecked the option for command-click opens a link in a new tab. After doing that - links from external apps opened as a tab in the same window.

But my suggestion is that... set the value "automatically" instead of "Always".

but in automatically... it opens according to requirement..

16
Command + Click not opening links in new tabs
14
Make folders opened by external apps open in a new finder tab rather than a window
11
safari to open external links in new window
11
OS X 10.11.1 with Safari 9.0.1 freezes on opening new tab or address bar selection
0
Is there anything I can do within Safari on macOS so that right-click opening a link within SE post to another SE post will open the tab as logged-in
0
Terminal command to force open new tab in Safari
3
With Tab Groups in Safari 15, opening in new tab creates blank tab