Is any version of OS X/macOS vulnerable to the Year 2038 problem?

Around the year 2000, Apple wrote a press release that every Mac since 1984 would avoid the Y2K problem, and could process dates for the next several thousand years.

The good news is that since their introduction in 1984, Macintosh computers have had the ability to make the transition to the year 2000. In fact, the Mac OS and most Mac applications can handle internally generated dates correctly all the way to the year 29,940.

This statement was made when Mac OS 9 was the most recent operating system.

Since then, OS X (now called macOS) is the dominant operating system, which is derived from Unix. Does this mean that any version is vulnerable to the Year 2038 problem, a problem comparable to the Y2K problem that affects Unix-like systems? Or does the statement Apple gave about being compatible to the year 29,940 still hold true? 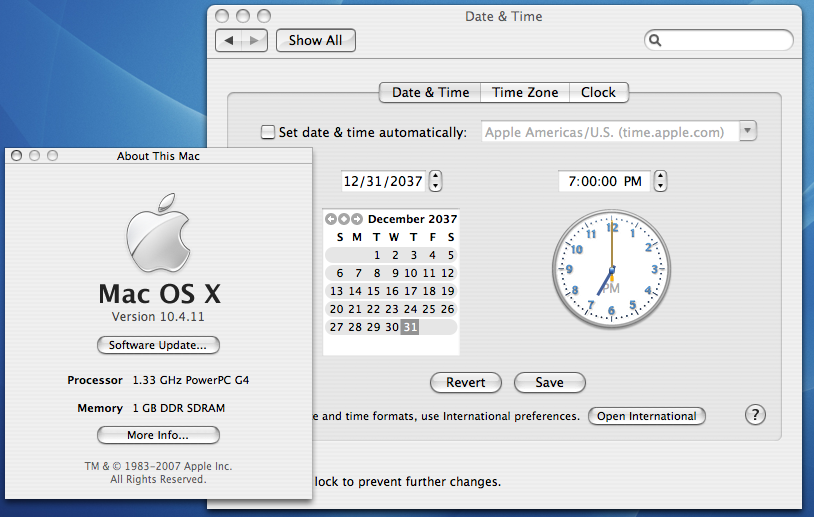 OS X is derived from Unix by way of BSD. Apps for OS X use BSD system calls for things like opening files and connecting to the internet. BSD has a long history and some of its system calls come from the 1980s. One of its system calls is gettimeofday(), which first appeared in 4.1cBSD. UC Berkeley released 4.1cBSD in 1982, more than half a century before 2038. The time from gettimeofday() is an integer of type time_t. It counts seconds, where zero is the Unix epoch of 1970-01-01 00:00:00 UTC.

With 64-bit time_t, the year 2038 bug is almost gone, but it might survive in a few apps. Old 32-bit apps might still run on newer systems. Also, 64-bit apps might contain coding mistakes or outdated designs, causing them to convert a 64-bit time_t to 32 bits. This is a problem for all systems, not only macOS.

There is also Mach time. The kernel of OS X mixes BSD with Mach. Most apps get the time from BSD using gettimeofday(), but there is a way to go around BSD and get the time from Mach. This is more difficult: the program would call mach_host_self() to get the host port, then host_get_clock_service() to get the CALENDAR_CLOCK, and finally clock_get_time().

I suspect that host_get_clock_service() was obsolete since 10.0 "Cheetah", because Apple provided faster ways to get the time. These were BSD's gettimeofday() for calendar time, and Apple's mach_absolute_time() for monotonic time. The preference for gettimeofday() put the problem in 2038, not 2106.

Well, as far as El Capitan 10.11.6 is in question, answer is not as easy as using Perl script.

If we try this

So that proves macOS in lowest, system layer is safe from Y2038 bug. That means the system as such will not fail and will work correctly.

However, on application level, that is not always the case.

Trying to push date to 2040, System preferences Date&Time responded by setting it to 01.01.2038 (you'll have to uncheck automatically setting) 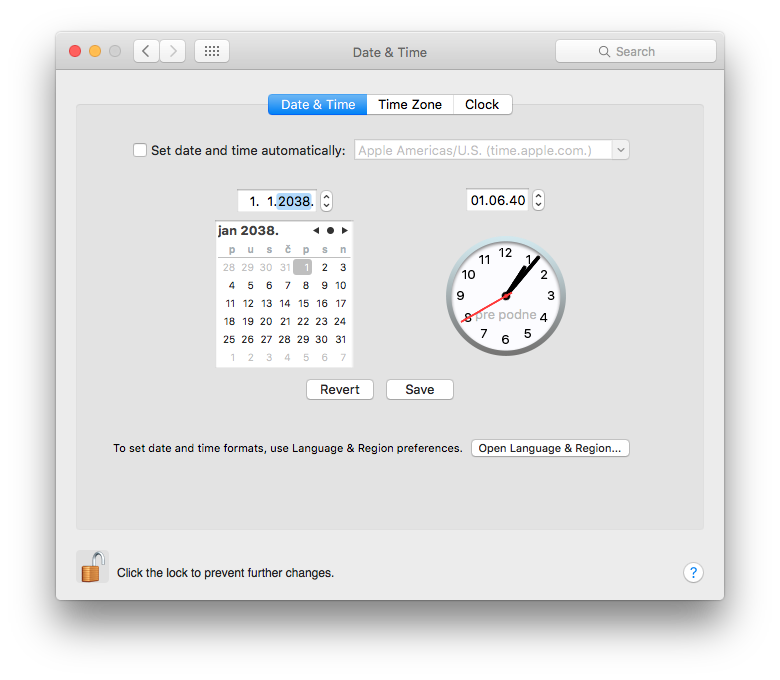 That means that it depends on application how will they react to Y2038 bug.

El Capitan is not susceptible:

This perl script provides the output below:

Information gleaned and script compacted to bare bones from this very interesting site.

Not the answer you're looking for? Browse other questions tagged macos unix time .

5
Any idea how to disable Version?
12
How can I find the macOS version codename?
1
How to install Linux & Windows on a Macbook
58
Are Macs vulnerable to the Bash shellshock bug?
3
OS X internet recovery older version problem
1
Put a preinstalled macOS SSD to another MacBook, will this occur any problem?
3
Why does touch -t replace the modification time with the year when I ls?
24
Intel management engine - is macOS vulnerable?
23
'The requested version of macos is not available - macOS Catalina