Force windows to be maximized but not fullscreen?

On my Early 2015 13" MBP, on both El Capitan and macOS Sierra, I notice that some windows -- particularly Google Chrome, of which I have the latest stable version -- often seem to resize themselves slightly upwards without my consent, not taking up quite the full length of available area between the bottom dock and the top bar:

See the dark gap between the bottom of the Chrome window (the area with "0 votes 0 answers" - that's a StackExchange webpage) and the light-blue dock showing my application icons? I'd like to have the OS automatically squeeze that gap for me.

I am not willfully doing anything weird like dragging my windows around with the mouse or resizing them when this happens. I think it happens when I close the downloads bar at the bottom of the Chrome window, most often.

I often use Alt + Click on the green button to force a window to be maximized-but-not-fullscreen, but if it's in this intermediate state where it's "not-quite-maximized", this key combo does nothing.

I don't want to run the window in fullscreen so that I have instant access to and visibility of menus and can always look at my dock without having to move my cursor to it.

Confession: I come to MacOS with a heavily Windows-based UI familiarity, and I'm used to the paradigm of having window dressings like menus and the Windows Taskbar taking up part of the screen, but being able to easily maximize windows with the "Maximize" button. Indeed, this behavior is consistent for the majority of popular GNU/Linux window managers, too. It's only on OS X / macOS where I'm seeing this strange behavior of windows that like to slide a few pixels underneath the bottom dock, or pull themselves up a little over time.

I believe this happens when dock scales up depending on a number of apps running and icons become a little big bigger. I was annoyed by this too and disabled [ ] Magnification. 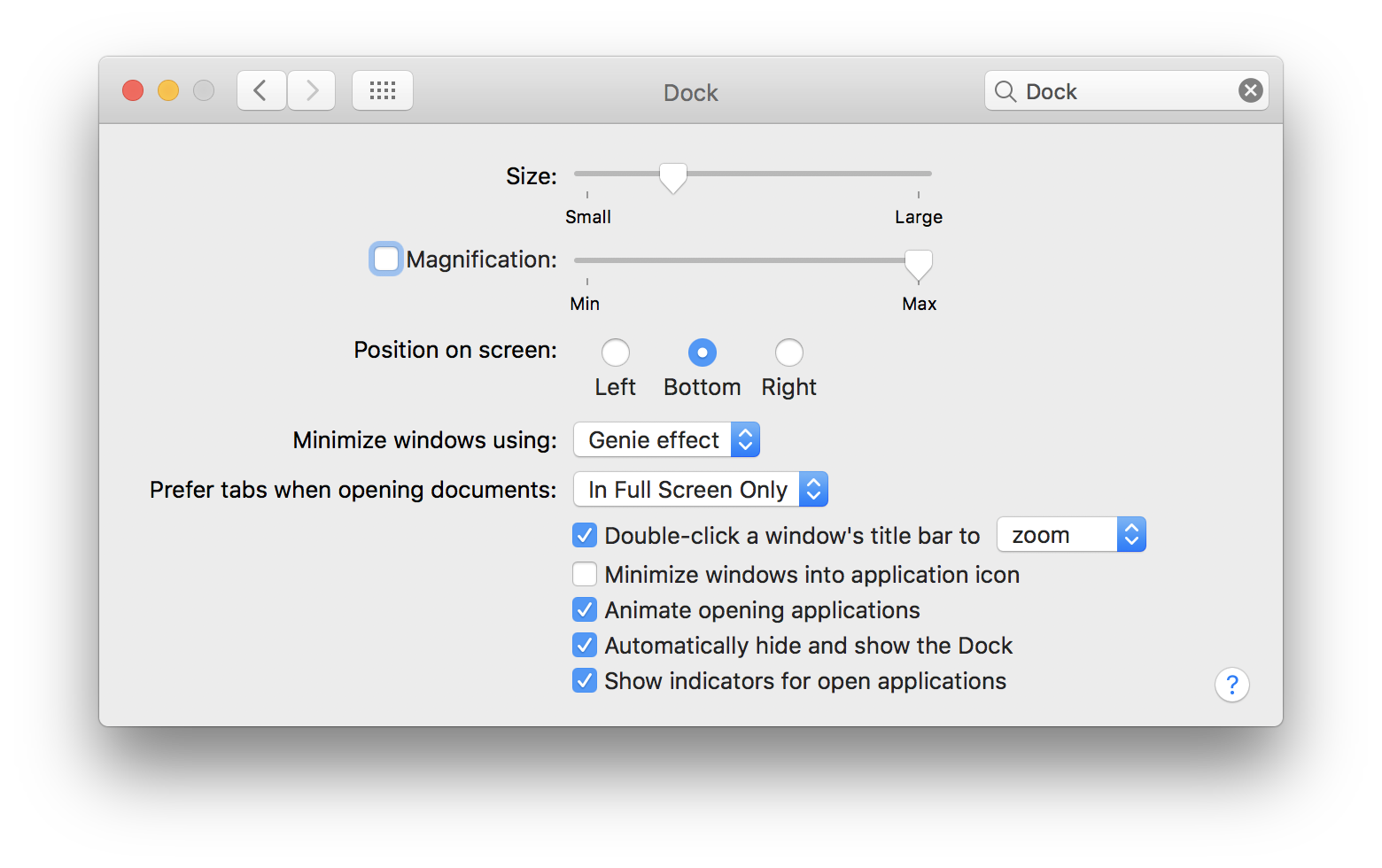 Not the answer you're looking for? Browse other questions tagged macos window-manager .

7
Is there a way to remove the gap between window edge and the screen edge when the Dock is hidden?

5
How to lock the size of the Dock?
7
How to make the maximize button behave consistently across applications?
24
Switching from Ubuntu to OS X and I'm lost
2
Accidentally moving windows using mouse
2
Can the Dock bar reserve it's horizontal space even if window is maximized?
1
Window being maximized while holding title bar
15
What's the difference between Minimize and Hide, between Maximize and Fullscreen, and what are all the keyboard shortcuts for these?
1
Change default fullscreen new window behavior
3
Avoid default fullscreen (no header, no dock)