The new version 12 of Parallels Desktop For Mac has a new configuration option. In the configuration panel > Hardware > CPU & Memory > Advanced Settings > Hypervisor is a popup menu for:

Which one do I should I be using when running macOS Sierra as the guest OS?

What exactly is the difference, the pros-and-cons of each?

The Parallels app Help has no mention of this new setting.

The Apple Hypervisor is a user-centric lightweight hypervisor that Apple provides so developers don't have to write kernel extensions (KEXTs). From everything that I have gathered, this is primarily for a dev environment

From the Hypervisor documentation on Apple Developer:

The Hypervisor framework provides C APIs for interacting with virtualization technologies in user-space, without the need for writing kernel extensions (KEXTs). As a result, apps created using this framework are suitable for distribution on the Mac App Store.

The Parallels Hypervisor is a more robust Hypervisor that isn't "user centric." Meaning that it can be invoked at the OS level, not just at the user level. You also get much more robust features like the Adaptive Hypervisor Technology that allows you to allocate CPU resources across the host and guest VM's

If you are looking to run a Window 10 VM for testing or a specific app, then either Hypervisor will probably work just fine.

If you are looking to load up a Linux host for dev work that you want accessible whether or not you are at your machine, you probably want the Parallels Hypervisor.

This post in Parallels Forum clearly states to use Parallels Hypervisor:

Parallels Hypervisor is the best one.

By PaulChris@Parallels, a Parallels Support person.

Apple are in the process of reducing a developers ability to introduce kexts (kernel extensions) onto your device. They are doing this because software houses that rely on kexts have as a rule proven more than capable of producing sub optimal systems capable of destabilising a Mac. Both VMware and Parallels use kexts; both companies products are easily capable of destabilising a Mac and both companies produce sub optimal software. I have used both VMWare (Fusion) and Parallels on a Mac; out of the two I found Fusion to be the most stable.

CPU usage across both products? Well, Windows if you leave it to 'idle' has a nasty habit of updating. So that's going to bugger up any preconceived ideas of which system is the most efficient. I've seen some 'framework' virtualisation applications cropping up and I have to say slim is best; when they weigh in at around 20mb instead of nearly half a gig, I think that speaks for itself. Veertu Desktop was the first to come onto the App Store and weighed 13MB. Parallels Desktop "Lite" is 234MB?!? Why? Veertu Desktop was a little crude, but it ran like Usain Bolt with NO evidence of ANY hypervisor instabilities. It's a real shame they didn't finish the job off.

The hypervisor framework (released in Yosemite, around 3 years ago), will enable software suppliers to get virtualisation products into the Mac App Store. The framework is not for developers, it is a mechanism to be used by developers to get you the products you want. There are quite a number of free products now appearing that support this framework. As a developer I cannot wait to see more virtualisation products to come out that I can run Windows on (for software development). I look forward to kext free virtualisation. The compromise is likely to be a reduction or removal of gimmickry that burdens the host system. So, no fancy window skins; who's interested in that anyway? No 'side by side' (the hidden windows desktop); again not interested I always run in a window or full screen. No accelerated gaming, though I'm not sure on that one. But, if you seek a gaming machine go native or build one. I seek stable, optimised, fast and efficient virtualisation. Currently neither VMWare or Parallels supply this.

I was considering trying out Parallels Desktop Lite; but if it's bug free and works, why do I need a £60 per yer subscription? By European law, if the product is buggy I'm entitled to a fix; I shouldn't have to pay for it. I'm not keen on companies whose business model is to bind me into a subscription because they're providing me with buggy bloated software. 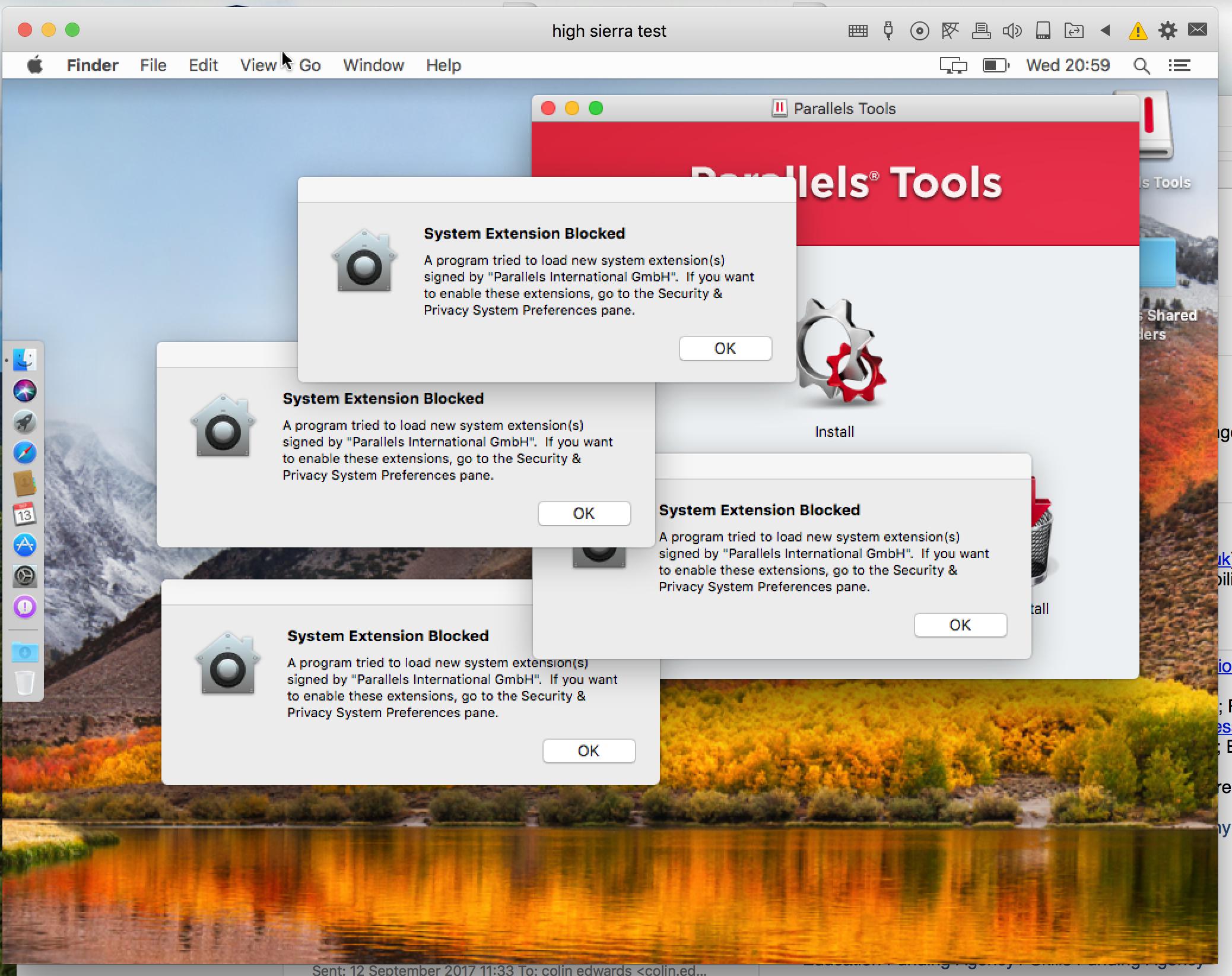 Crashes and lockups happen more or less as frequently whatever vm software or hypervisor I use.

You should try either setting and check what fits better for your use.

Not the answer you're looking for? Browse other questions tagged macos parallels-desktop virtualization .

2
Are there any performance limitations when running a VM of a Boot Camp installation?
5
How to install Mac OS X in Parallels VM without extra `OS X image file.hdd` file on host Mac?
2
VM running Sierra 10.12.3 in Parallels 12 stops responding to the mouse
5
macOS Calendar app stopped syncing with Google Calendar
2
Should virtualize within MacOS or use a Hypervisor like VMWARE ESXi
1
Changing the default folder for opening a new Finder tab or window in macOS High Sierra?
1
Repeated Corrupt Parallels .PVM file
0
How to improve the performance of a Ubuntu Virtual Machine running in VirtualBox?
0
Exchange clipboard only with a virtual machine running in Parallels 14
2
Connecting to a VPN on the Guest OS