How do I measure the performance impact of antivirus applications?

I'm evaluating Antivirus software suites for my Mac, and would like to measure the performance impact they have on my computer.

I am not looking to do a expert-level thorough examination, but rather get a crude measure with some snapshot data points (or time-series data if possible).

If there is a general answer that applies to measuring any type of application, perhaps the question title should be changed to “how to measure the performance impact of MacOS applications”.

Note: There are of course a few AV comparison sites out there. But I've been slightly perplexed when looking at their results. For instance, one year ESET Cybersecurity Pro gets a top score in the performance department, but the next year it scores much lower and the article will say that it's a drag on the computer. I gather that one way to find out what works is to test them yourself.

AV-TEST state that their method is to use a large number of files & record the time taken to download, then repeat using each antivirus & see how much it slows down.

For the load test of the security packages, 839 files, representing a volume of 30.6 GB, were copied on a reference system, and many downloads were performed. The time needed for these tasks served as the reference value in the test. As soon as a protection solution was installed, it was required to complete the same tasks. The relevant times required are listed in the latest test chart. The results, however, could not be more diverse. The reference time was 246 seconds. As already mentioned, the packages from Bitdefender and ESET, with 249 and 253 seconds, hardly put the brakes on the system. The other values from Symantec, Canimaan Software, Kaspersky and AVG are good up to the clocked 268 seconds, however they're not great. But after Sophos with 284 seconds, the values continue to increase significantly: from 292 to 466 for Avast. The nearly unbelievable value of 1387 seconds was measured for Dr. Web. That is more than 5.6 times the reference value. 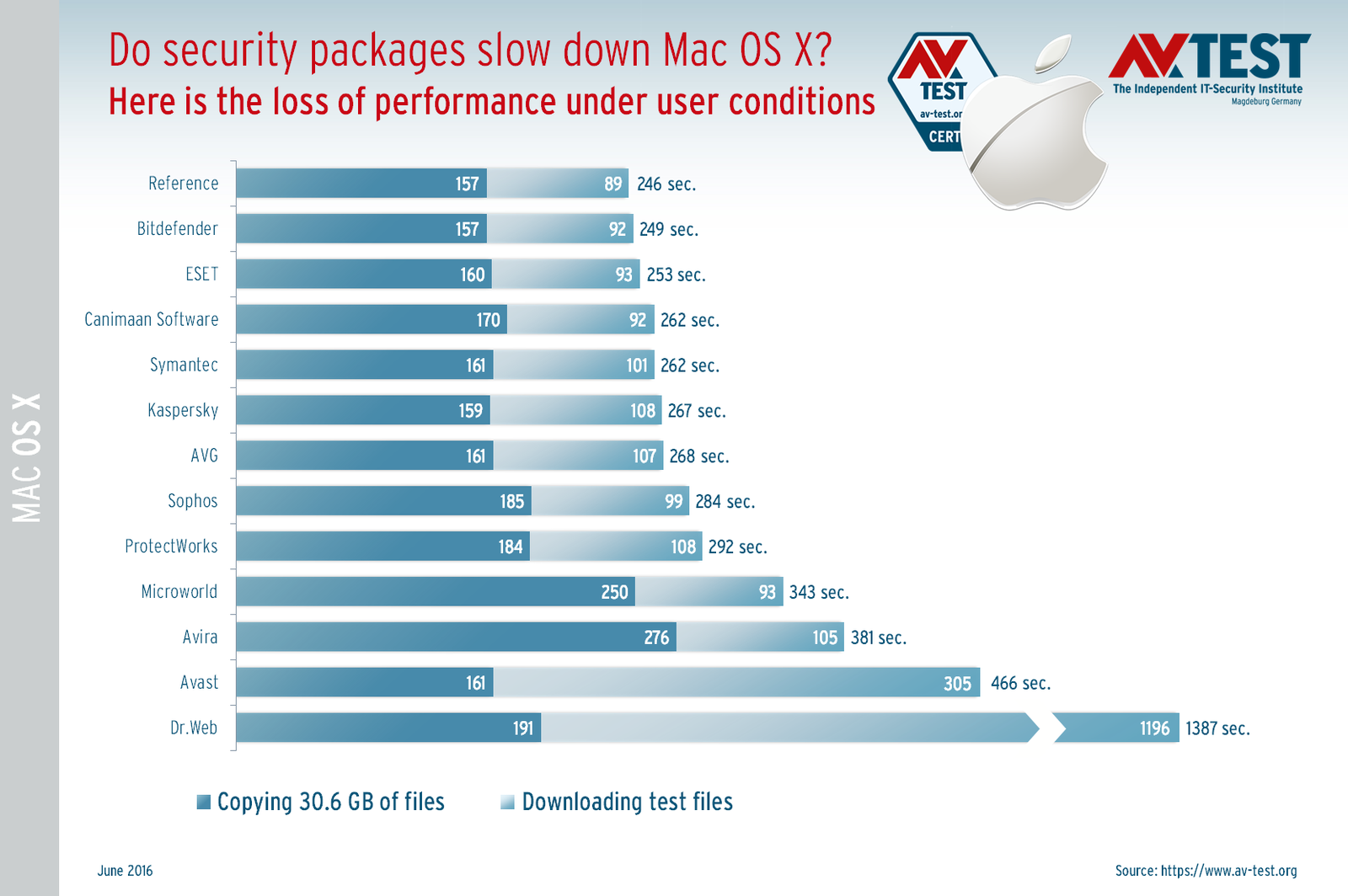 In my own, less than scientific tests, I could feel the slowdown using Sophos or Avast, long before I read about them on the AV-TEST site.

Regarding system load, they appear to be less specific. One can only imagine they are looking at Activity Monitor, but there's no direct information, only the rather vague

The two charts with the test results quickly reveal that the protection solutions from Bitdefender and ESET, despite 100% detection rate, cause little or no burden on the system. They require for their own performance a mere 1 to 2% of system resources. Most of the other solutions in fact require up to 10% system resources for security performance, in some cases even m ore.

Not the answer you're looking for? Browse other questions tagged macos performance anti-virus .

4
Snow Leopard vs. Lion performance: what are the differences?
0
How can I effectively analyse my macbook's performance issues?
6
How can I boost the performance of my MacBook?
3
What impact can a dual monitor setup have in overall performance?
4
Is antivirus software a necessity with the “rise” of MacDefender and others?
1
What is the performance bottleneck when launching large applications on OS X?
3
Relationship between OpenType fonts and PostScript printers, and impact on printing performance?
2
How does installing XCode, Visual Studio and Unity on my mac impact my computer's speed?
9
Do application leftovers have any impact on performance?