Why is this playlist copying the wrong songs to my iPhone?

I have a rather complicated playlist in iTunes called "Headbang." It looks like this: 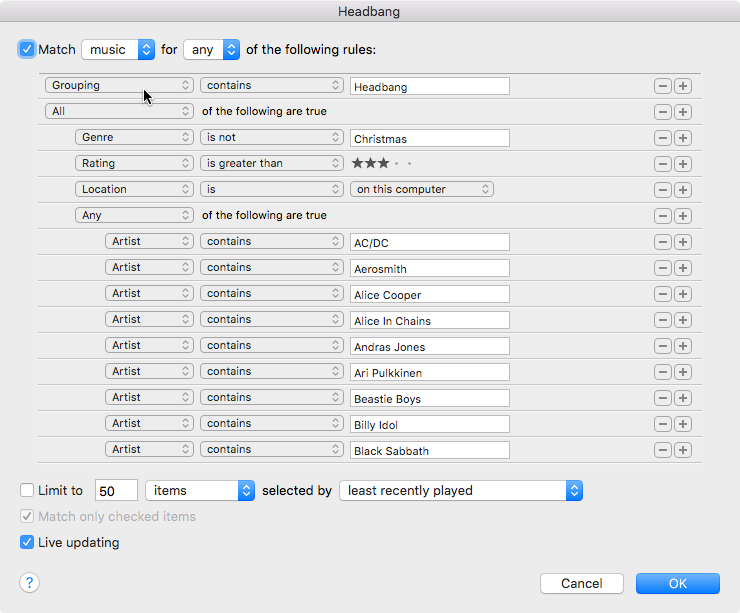 There are about 50 artists included in that final criteria. This works perfectly in iTunes and the playlist gives me about 1,500 songs.

When I sync my iPhone and tell iTunes to include that playlist, I get a playlist on the iPhone that is named "Headbang," but the playlist has 5,995 songs, and I have no idea how they're selected. All of the songs that in the iPhone's version seem to be 4-star, and I do have another playlist called "4 Star Music" that is copying over, but it has only 5,935 songs, so it isn't exactly the same list of songs, although "4 Star Music" might be a subset of "Headbang."

I tried duplicating the playlist, but that didn't work, and neither did renaming it. I haven't manually recreated it yet because of how many artists are included. The only way I was able to get a playlist on the iPhone with those 1,571 songs was to select all the songs in the smart playlist and manually create a new playlist from them. Obviously I'd like to use the smart playlist if I can figure out what's wrong.

Note that I don't seem to be having problems with other smart playlists. So, any suggestions on how I can get this playlist to copy the correct songs to my iPhone?

Here are the current version stats:

Well, I tried a different tactic. Barring the "Location" criterion, the playlist is basically, "All the 4 and 5 star songs by this set of artists that isn't Christmas music." I have a 4 star smart playlist, a 5 star smart playlist and a Christmas playlist, so I took the time to create a "Headbang Artists" playlist (BTW, 97 artists), and created a new smart playlist that had the criteria of, in "Headbang Artists," not in "Christmas," and in either "4 Star Songs" or "5 Star Songs." This synced successfully.

I'm guessing the other playlist is corrupted somehow and that the duplication of it also duplicates the corruption somehow. But I'll keep it around for a little while in case anyone else knows how to actually fix it in case someone else has a similar problem.

Not the answer you're looking for? Browse other questions tagged iphone itunes smart-playlist .