How Can I Create A Service To Alphabetize A Comma Separated Text String?

My understanding is that RegEx will not do this. What will?

My issue, specifically, is extremely messy iTunes genre tags. I would like to merge genre tags that have the same or similar comma separated values, and to merge those values in alphabetical order. I have found scripts that can do this with tab separated lists, but not comma separated strings. I have not been able to find any existing app (or script) that will allow me to merge, for instance:

Another instance might be merging and alphabetizing the genre strings of tracks with classifications such as: 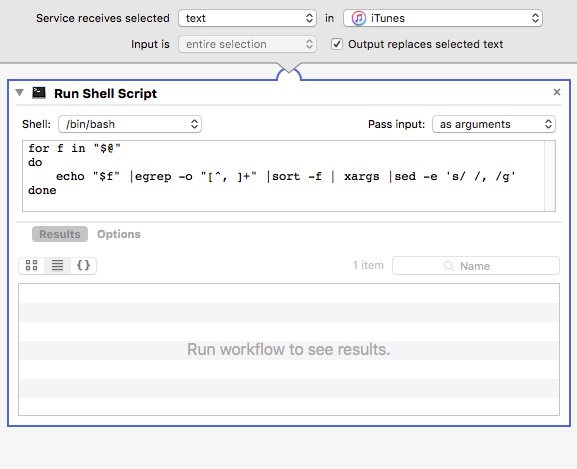 I will probably look into how to modify this to work on batches of tracks, which will be a little bit different since the text, itself, isn't, in that instance, specifically selected, but this works for now on a single track at a time basis.

Not the answer you're looking for? Browse other questions tagged itunes text metadata sort .

2
How can one create a shortcut for pasting unformatted text in Microsoft Word 2008 for Mac?
9
How can I modify the Date Added field in iTunes 10
3
How can I tell iTunes that a .M4V (movie) is an HD movie?
3
How can I transcribe a Voice Memo to Text?
5
How to create a service that puts selected text into quotation marks?
10
How can I globally disable 'Text Replacement'?
6
How to use AppleScript to create a new Rich Text Format file from clipboard text?