I've been having an issue with a program I use heavily every day, where it it acts like it is recovering from a crash even when it was quit properly and all files saved. The app is FontLab Studio, not that it should matter. What happens is that it loads all the files I've worked on recently, which can be several dozen, and even if I click out of them all, it happens several more times throughout the day. Or, something causes it to crash as I'm exiting these files so that I have to relaunch and it starts all over.

What I've been doing to avoid this, is to run AppCleaner, the free uninstaller, and delete everything but the App itself and the license info. This works great, but given the frequency this is becoming necessary, I'd like to be able to create something I could access really fast, like an Applescript that I could put in my dock. Or an Automator service located in the contextual menu items.

I don't know any Applescript, but I tried to make an Automator workflow. The first step, "Get Selected Finder Items." One has a static location, the second may change, I'm not sure.

The second step in the workflow is to move to the trash, and that's where it fails. I suspect because these require a password? If possible, it would be great if I could enter it once and it remember, otherwise, how I'll need it to prompt me to enter my passkey. I don't know the best way to do any of this. 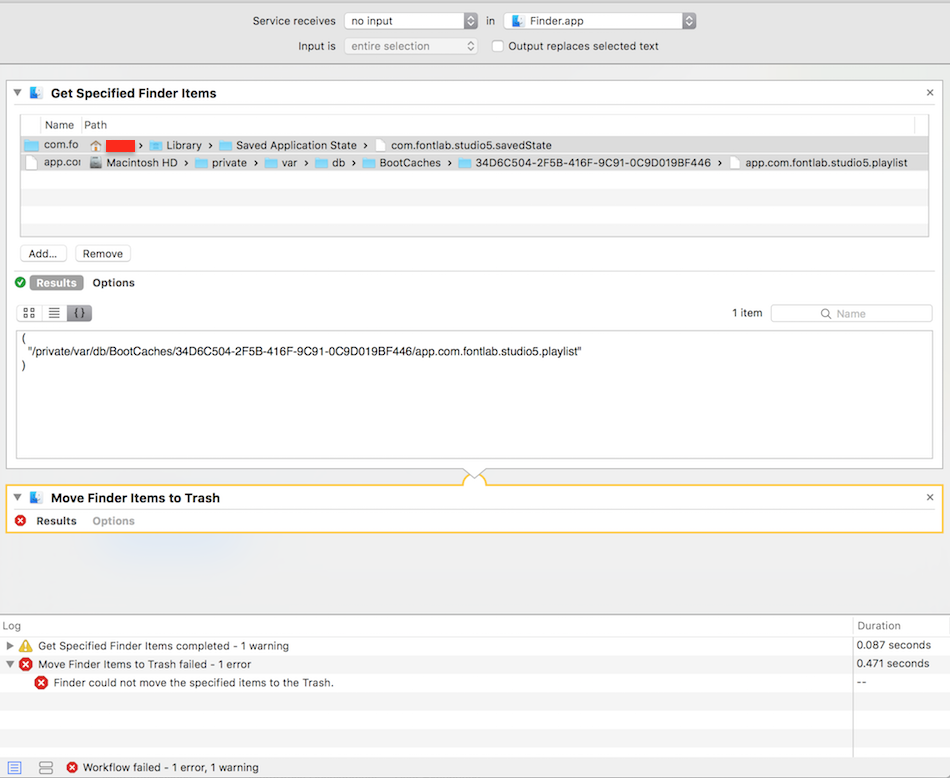 I just had another thought, though it may not work as it would require FontLab to be open at the time, would be to accomplish this with a Python script, because FontLab is partially built in python and can install third party scripts. I am open to whatever help anyone could offer.

I do not have FontLab Studio installed however for the purpose of providing a solution to your situation, under OS X El Capitan 10.11.5, I did the following:

In doing so this replicated the target locations and files with appropriate privileges to then test the following AppleScript application on.

In Script Editor I used the following code to create the Reset FontLab Studio.app and saved it in the Applications folder of the Macintosh HD and then dragged it to the Dock so as to have it readily available to click on.

When I click on the Reset FontLab Studio Dock Tile it showed the password dialog box, as shown below, for me to type in my password. I typed in my password and pressed enter. That's it, the app did what it was programmed to do. 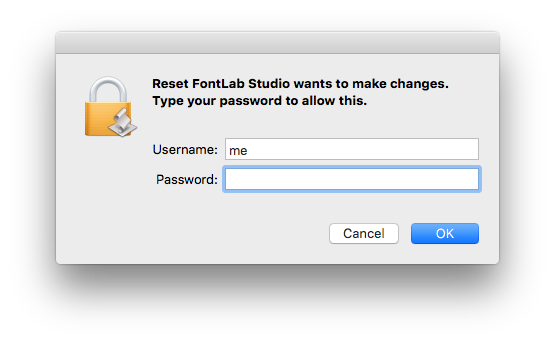 If you're the only user of the computer and you like not to have to type in your password when the Reset FontLab Studio app runs, then modify the do shell script command using the following syntax:

Note that when the script's code is saved the value of user name and password are saved in readable text within the application bundle's "main.script" binary file. So use this method at your own risk as it is considered to be a security risk storing user names and passwords that are stored in an unencrypted manner.

Not the answer you're looking for? Browse other questions tagged macos finder applescript automator python .