Sending commands from TextWrangler to the terminal

I want to send commands from TextWrangler to the terminal. Even if I found this, I don't understand how that works since I'm brand new to Unix and running Applescripts. 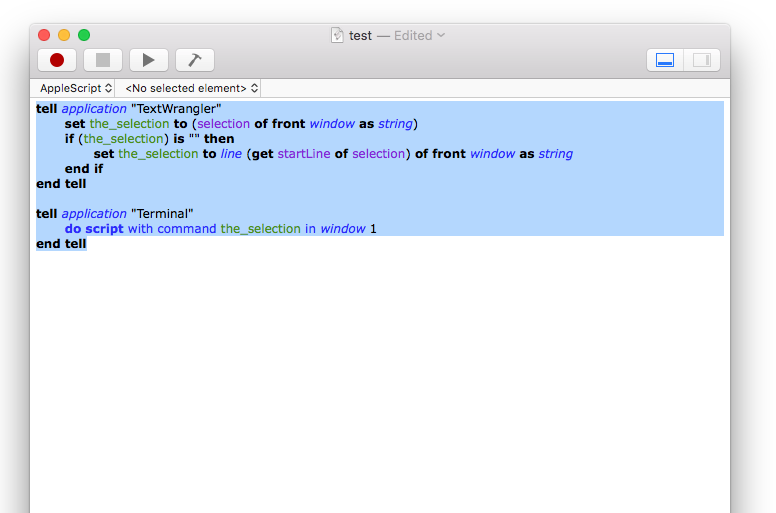 Now, what I think is to put the script in the TextWrangler Scripts Folder:

For the purpose of answering this question I created an AppleScript named Run Selected Line(s) in Terminal.scpt and placed it in TextWrangler's Script folder and is now available on the Script menu in TextWrangle as show in the image below.

That said, the script you have, as written may fail as Terminal can be a bit finicky. In other words, if Terminal is closed when executing the script, then the code as written can produce an error, e.g.: "A scripting error has occurred: Terminal got an error: Can’t get window 1."

Even telling Terminal to activate didn't open a window like it does when opening Terminal from the Dock Tile I have set to "Keep in Dock" and I'd get the aforementioned error. So a Google query yielded much useful information. So I experimented with a few different solutions I saw and the code I'm using is shown below.

Note that I've commented out the delay command with -- and may or may not be needed depending on if Terminal is initially closed and or how slow your system responds. The value is in seconds expressed decimally. You can uncomment and modify if/as necessary.

Not the answer you're looking for? Browse other questions tagged macos terminal keyboard applescript textwrangler .

8
How can I write a script to open multiple terminal tabs and execute code in them?
3
Problem setting terminal window bounds with AppleScript
0
pasting commands from TextWrangler to Terminal (applescript troubleshooting)
6
Opening new Terminal.app window/tab with a certain profile from command-line or AppleScript?
2
automatic save before “Run in Terminal” in BBEdit
2
Can Someone Explain Why These Scripts Work?
2
What is a safer way to write this applescript
2
Application created with Script Editor ignores the selected item on the 'tell current application' popup menu
6
osascript and AppleEvents
1
How can I control the Terminal in the current space with AppleScript?