Because Apple Thunderbolt Display reflects the whole room, I still use the matte 30" Apple Cinema Display. (Two cables are required for 2560 resolution due to some obscure technical constraints!)

After weeks of trial and error, I have finally achieved 2560x1600 resolution on my Apple 30-inch Cinema Display connected to my MacBook Pro,15-inch, 2016 laptop.

The trick is to go from USB-C to Mini Display Port (MDP), then to dual-link DVI. Unfortunately, this does take two adapters, but at least the full monitor's resolution is supported.

I used the following adapters:

Also to note, the DVI adapter needs to be powered by the attached USB connector, and the monitor break out cable USB also needs to be attached to the MacBook.

A bit of a cabling challenge, but everything is now working 100%. Andreas came up with a substantially similar solution, but with different brands and gets the answer bonus!

There IS a solution to this problem, I searched and purchased quite a few adapters but finally I got it to work:

2) Purchase this Display Port to "Active Dual Link DVI". It is important that it is an active converter and not a passive one: https://www.amazon.de/gp/product/B00856WJH8/ref=oh_aui_detailpage_o01_s00?ie=UTF8&psc=1

Sorry for the German pages but I am sure you can find it also in other countries' stores.

Connect that combination and also don't forget to connect the active converters power through USB.

Works like a charm! I know it's pricey but I love my 30" Cinema Display. I also got my old MOTU Firewire audio interface with apples TB3 to T2 and then TB2 to FW and an additional FW cable from Belkin to run.

Now I use my exact same setup as with my old MacPro but it's the MacBook Pro 15" with Touch bar. Logic Pro with a Project of 40+ Audio Tracks does put a load of 50% to the system :-)

If you need more info just answer here, I can help :-)

UPDATE: The following item is USB-C to Dual Link DVI-I (which can take DVI-D). No need for multiple adapters. Alas, this does not support the 30" Cinema Display, according to the product page:

"The USB-C to DVI adapter will not work with Apple Cinema Displays or the Dell 3007WFP. These monitors require a true DVI-D signal. Please note this before purchasing"

Here's a single adapter solution (USB-C to dual-link DVI) that IS working on my 16" MacBook Pro and my 30" Apple Cinema Display:

The adapter is plugged into one of the MBPs four USB-C ports, and of course the Cinema Display's DVI plug is plugged into the adapter. There's no need to connect the ACD's USB-A cable (unless you want to use its USB ports as a hub).

After normal timeout sleep of the Mac, it takes about 6 seconds for the ACD to show the screen, noticeably longer than when I had it connected through the Apple TB2 adapter to my old iMac.

Aside: a small downside compared to my iMac is that plugging anything into the MBP's right-hand USB-C ports puts the cables in front of my ADC screen.

I previously tried the Accell Mini DisplayPort to DVI adapter like the one Andreas used, into an Other World Computing Dock display port, which lit the ADCs backlight and it showed up in System Preferences, but no picture at all. I returned the Accell--I'm not sure if it really didn't work or I would have needed one of the other adapters above. The OWC USB-C Dock is otherwise working great, although I picked it knowing it didn't have full power to charge the 16" MPB. It was OWC support that suggested there would be a USB-C/DVI adapter now.

Update 9 Jan 2020: After a few weeks with no problems, the Mac frequently wakes up in a mode where the built-in display flashes on and off and the ACD shows nothing. Can't say whether the Club adapter is causing this but it doesn't happen when not connected. Rebooting allowed me to reconnect successfully.

After trying at least 9 different adapters, I finally found one that worked! USB-C to MiniDisplayPort: https://www.amazon.com/gp/product/B01CJHHTR8/ref=oh_aui_detailpage_o00_s00?ie=UTF8&psc=1

You'll also need a USB to USB-C if you want to use your Cinema as a USB hub as I did. As far as I can see, there are no USB+DVI to USB-C adapters except this one: https://www.amazon.com/gp/product/B01MD0XXMI/ref=oh_aui_detailpage_o04_s00?ie=UTF8&psc=1

You'll need a USB-C to DVI adapter to connect the 30" Apple Cinema Display to your USB-C Macbook. This $22 one, by Cable Matters, supports resolutions of up to 2560x1600 (the same as your monitor) and works with Thunderbolt 3 and the new 2016 MBP.

I'm sure a commenter will be quick to point out that it's not a dual-link DVI adapter, but it doesn't have to be: it allows all 2560x1600 resolution through its single link (well enough, in fact, to trick most reviewers into thinking it's dual-link). It will still push 2K resolution to your Cinema Display. 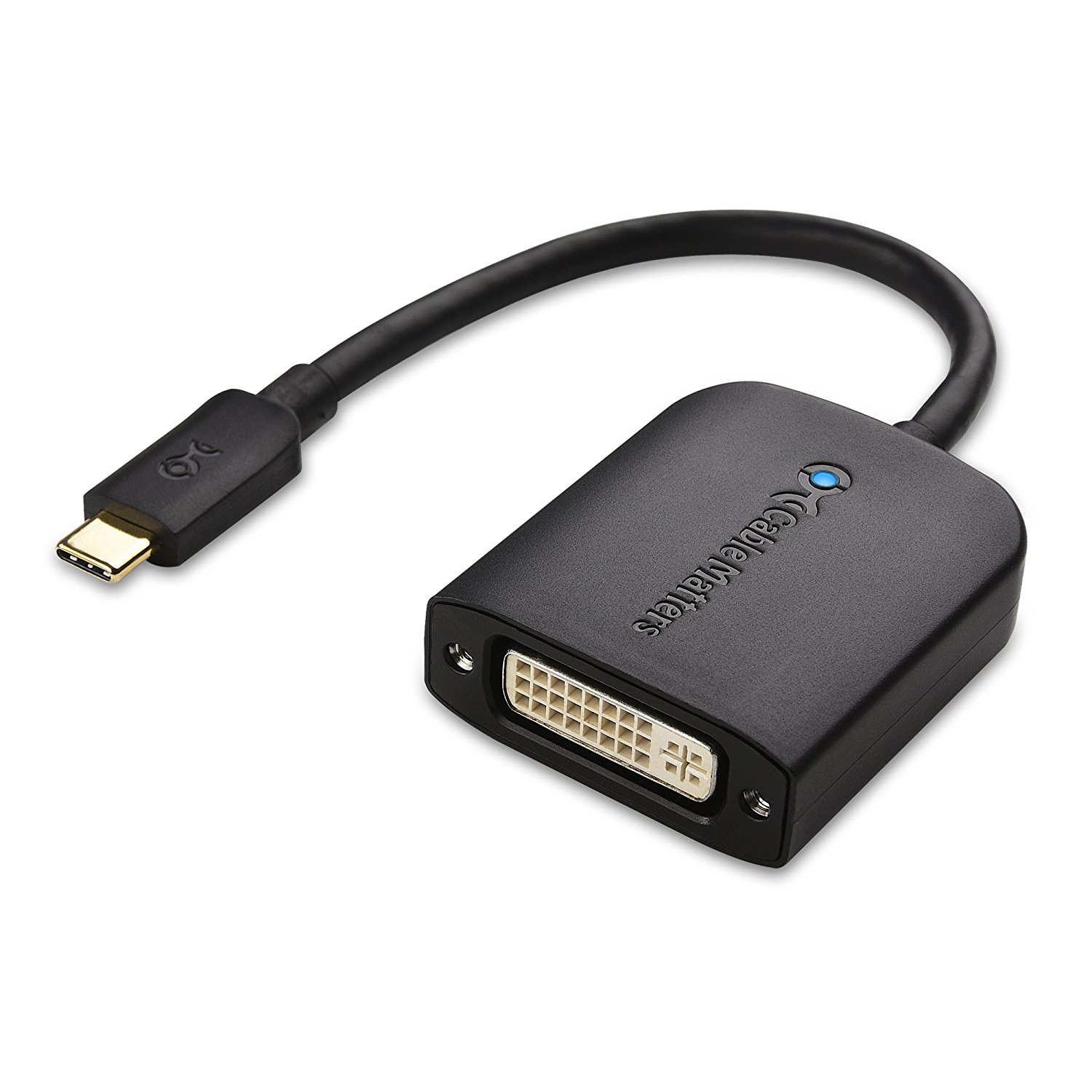 Edit: If you don't have a DVI-to-DVI cable (which you'll need to connect the monitor to the adapter), I recommend this gold-plated one.

You need to find a USB-C to dual-link DVI adapter. The first hit on Google, for example, is this: StarTech USB-C to DVI Adapter CDP2DVI

Note: This is not dual link DVI and will not support the full resolution of an Apple 30” display.

Note that the small/cheap Apple Thunderbolt 3 (USB-C) to Thunderbolt 2 Adapter will NOT work to convert a Mini DisplayPort signal to USB-C, despite using the same port design.

It is incompatible with the 30" Cinema Display and other non-Thunderbolt DisplayPort monitors.

The Thunderbolt 3 (USB-C) to Thunderbolt 2 Adapter doesn’t support connections to these devices:

I found a single adapter that worked.

Note that there is a very similar model, the CAC-1510 that does NOT work. The one that works has "-A" at the end of the model number.

The difference (according to Club 3D):

I've been moving it back and forth between my personal Mac and my work Mac, and after about 16 months, it has become flaky. It came with a 24-month warranty, and I've just sent a request to get it replaced under the warranty.

I note that Amazon sells several models that seem to be the exact same device as my Club3D, and they all explicitly claim to support the Cinema Display:

Also note: If you want to use the USB ports on the back of your Cinema display, you'll also need a USB-A to USB-C adapter.

You can try buying a USB-C to DVI Adapter. Here is one that I found:

On the link it says that it should work with the new USB-C MacBook.

Tom ShenTom Shen
3,15944 gold badges2323 silver badges4646 bronze badges
1
Add a comment  |
-3
Want to improve this post? Provide detailed answers to this question, including citations and an explanation of why your answer is correct. Answers without enough detail may be edited or deleted.

I believe there's current no way of doing this :(

New Solution! January 2020: I have the 30" Cinema Display connected to new a new MacBook Pro 16" at full resolution and all controls can be accessed. This requires the Apple DisplayPort to dual-link DVI adapter and this thunderbolt 3 to DisplayPort/Thunderbolt 2 adapter that has full support for video up to 4K @60hz. https://www.amazon.com/dp/B017TZTMBG?ref=ppx_pop_mob_ap_share This $20 adapter seems to recreate a fully functional Thunderbolt 2 port like the older MacBook Pro's had. The Apple Thunderbolt 2 to DVI adapter must have it's USB cable plugged in to power its conversion electronics. If it doesn't immediately sense the Cinema Display unplug the power cord from the small cord from the Cinema Display power supply, wait a few seconds then pug it back in. Mine worked perfectly after that. It is instant sleep and instant on.

Not the answer you're looking for? Browse other questions tagged macbook-pro usb cinema-display dvi .