I have a really strange problem with my sister's MacBook Pro (Mid 2012, running El Capitan): it is incorrectly identifying the physical layout of the built-in keyboard. It isn't just a matter of mapping the buttons to characters incorrectly; the diagram shown in "Keyboard Viewer" actually shows more physical buttons than exist on the keyboard.

Note: see the update at the end for the current status.

The physical keyboard appears to be the correct US English version, and it is called "U.S." in the "Input Sources" preferences pane — but here's a screenshot of what Keyboard Viewer thinks it physically looks like:

Thanks to Wikipedia-ing (and a helpful clue from the yen symbol), I think this is showing the Japanese Industrial Standard layout, but I don't actually read any East Asian alphabets, so I'm less than 100% confident.

My goal is to get the layout recognized as standard US QWERTY, either (preferably) by actually getting OS X to believe it is one, or by re-mapping the keys it believes it has. I've read Create and use your own input source, but so far without success. I think my issue may be that the characters it wants to map from are the Japanese(?) ones rather than the ASCII ones.

Interestingly, I tried booting from a Ubuntu USB, and it recognized the keyboard with no problems. On the other hand, the layout was still incorrect when I booted from the OS X recovery partition.

Any advice on how to correct this would be very greatly appreciated!

Inspired by Tom Gewecke's answer below, I tried re-setting the SMC, which has changed things. Probably the fastest way to describe it is with two new screenshots (taken with the "U.S." input source):

As you can see, it's not Japanese anymore, but it also still doesn't match the layout of the physical keyboard. In Keyboard Viewer:

So, for practical purposes, this is a huge improvement, since the physical keys now all do what their keycaps say they do. On the other hand, something is clearly still wrong, since Keyboard viewer still has keys in the wrong place, keys that are the wrong shape, and one key in it's diagram (the §/± key) that isn't mapped to any to any physical key on the keyboard.

I've tried resetting the SMC a number of times; the resulting layout is always either JIS or ISO, but never ANSI, and I've yet to find any pattern that would allow me to predict which the result will be. More concerningly, even when I get an ISO layout by resetting the SMC, it will revert to a JIS layout at some arbitrary point while using the system.

After a long delay, I recently gained access to this machine again. Following up on dan's comment, the keyboard is indeed showing the USB "product id" 0x0264, which appears to be the JIS variant for the MacbookPro10,1 (this model). Here's a screenshot: 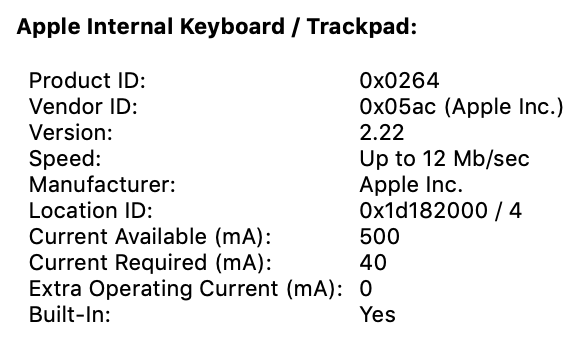 You machine is mistaking the Keyboard Type. See if this helps:

If nothing else works, try this Karabiner fix:

Not the answer you're looking for? Browse other questions tagged macos keyboard hardware internationalization .

1
How Can OS 10.9 Kotoeri Keyboard Layout Behavior Be Reverted To That of 10.8 and Earlier
2
Macbook sees Japanese keyboard instead of native US English
2
Changing the keyboard layout (NOT language) based on the input language
0
How to type backslash and pipe? (Czech layout, USB keyboard)
3
Change Mac Keyboard Identifier after keyboard replacement
3
Different keyboard mapping on external keyboard
1
Write in English using a foreign keyboard layout on iPad
0
QWERTY US - QWERTY International OS Layout