I know that the new rMBPs have no "user-serviceable" RAM. But is it possible to solder a new RAM chip onto a 2015 rMBP? Given that the technician doing this is able to install the new chip without damaging anything, would it work?

The short answer is yes (anything is possible), but is it feasible?

There's a ton of responses out there whether you can/cannot re-solder memory chips to Apple logic boards in an attempt to upgrade RAM. Unfortunately, there is a lot of misinformation out there. Basically, they all revolve around one of the following three themes:

Replacing a chip is actually quite an easy process if you have a BGA rework station and a little bit of practice.1 You actually don't need a significant amount of "electronic engineering" skill to remove a chip and replace it with another. It doesn't need to go back to the factory as doing BGA rework doesn't damage the board.

Are you going to do this with a soldering iron/gun that you get from Radio Shack or your local electronics supply store? No.

However, obtaining a BGA rework station is not out of the realm of possibility either. A quick search on Amazon yields both infrared and hot air rework stations that vary in price from $150 to $6,000 depending on the the bells and whistles you want. The key here is how accurately the rework station can deliver the heat necessary to flow the solder. 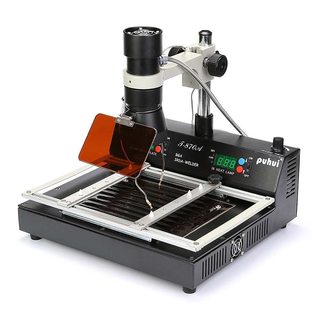 Because the heated air or infrared light is focused directly to the work piece, heat damage to the remainder of the board is mitigated

As for my personal experience, I have had GPU's replaced in Apple logic boards that weren't covered by Apple's GPU replacement program using this exact method and not only got a year's warranty on the work, but the logic boards lasted for years after.

So, can this work be done? Yes. Quite easily.

How much memory can be addressed?

There has been a lot of speculation as to how much memory a computer can address. There has even been conjecture on the "additional (physical) space" required for the new chips.

First and foremost, the memory limit is primarily determined by the CPU. For example, on an original i7-920 CPU, the maximum amount of memory that can be addressed is 24GB of RAM.

If you notice, Intel states that it's determined by the "type of memory." This is where the logic board comes into play. Depending on the type, the logic board and the memory modules available at the time may impose a limit less than what the CPU can address.

Haven't you ever noticed that everymac.com has tested higher configurations that what was technically specified by Apple?

This is because what was available at the time the product was released, higher density memory chips weren't generally available. When they become available, you can upgrade your Mac past the specified limit.

To see what your particular CPU can address, obtain the CPU identifier from your machine and get the specs from http://www.intel.com

In the pre-soldered RAM days, when you wanted to upgrade your Mac with more RAM, were you stopped because there wasn't any more "real estate" on your logic board? No. You replaced the module(s) with larger ones.

Memory modules (of a particular family)2 only differ in density. As for physical layout, pin out configuration, voltages, etc., they are identical. So, using the example I linked with DigiKey, you could have 8 modules of 16M for 128M or 8 modules of 512M for 4G. Same real estate, same configuration.

So, can you get "bigger" memory chips? Yes.

Is all of this feasible?

Again, in the pre-soldered RAM days of Apple it was quite easy to upgrade your memory. Now, unless you are willing to invest in a rework machine and put in some practice reworking a BGA chip you are going to have to send this out to be done by someone with experience.

I have sent many clients damaged logic boards to a firm in NYC that specializes in this type of work. It usually costs between $350 and $500 depending on the severity and what parts are needed. Estimating that replacement memory chips would be around $200 and the work would be on the high end given that there are multiple chips to replace (say $450), you are looking at $650 to upgrade your memory.

A quick look on Apple's website tells me that to upgrade a MacBook Pro from 8GB to 16GB is only $200.

Bottom line: Is this feasible?

Keep in mind, if you undertake this type of modification, you will void any warranty on your MacBook, if there is one still in effect.

So, we are left with a cost comparison:

No this is not feasible. Period.

1 I actually did this work about 4 times a year, at the end of every fiscal quarter, when our company would go "all hands on deck" to the manufacturing and shipping departments to get as much product out the door as possible. Normally, I worked in product management as a go between marketing and development. However, for about a week every 3 months I was in the QA department re-flowing chips using a hot air rework station like the one referenced. They gave me this job so the actual tech could spend time diagnosing the problem rather than spend time doing the mundane work of re-flowing a BGA. I had about an hour or two of training and became quite proficient at it.

2 The memory shown here is for illustration purposes only. It's not intended to be the specification for memory used in any Apple or other manufacturers' product.

You can definitely buy the requisite parts aftermarket - DigiKey would be the first place I would look. You could also remove the parts from another rMBP (e.g. flood damaged or something).

You can probably do the modification without damaging other things on the board, but it would be difficult. You are not going to do it at home. You're going to need someone very experienced with BGA rework with the appropriate equipment. It's a tightly packed double-sided board, so you need to be careful not to disturb other things nearby.

I don't know how the machine knows how much RAM it is supposed to have. It probably has an SPD chip, which you'd also need to replace or modify. It might be written to one of the many NVMs elsewhere on the board, which would be harder to modify. You can find schematics of the rMBP online, and they may tell you if there is an SPD chip.

The iFixit teardowns show that the lower-specced machines do not have empty space for more chips; Apple does RAM upgrades by putting higher density parts in the same locations.

So... it might be possible, but it won't be easy. I would recommend selling the old machine on eBay (resale price is good!) and buying a new one with the specs that you want.

I don't think this will be possible. The board will be manufactured with only that size of memory in mind, so the memory controller or other hardware would have to be changed too, and its not like there will be place for more memory chips.

One exception I can think of is if some higher model has more memory, then there might be some unpopulated place for chips.

Also reworking BGA packages is... very close to impossible. Sourcing bigger memory modules would be the easiest part as I doubt Apple would use the biggest ones available and sources like DigiKey have them.

Not the answer you're looking for? Browse other questions tagged macbook-pro hardware upgrade memory repair .

38
Can I solder more memory into my MacBook Air?
4
Can I upgrade the memory on late 2013 Retina MacBook Pro?
2
Mac mini Late 2014
0
Is it possible to upgrade the ram of MacBook pro 2017 from 8GB to 16GB in India?
35
How do I identify which CPU a MacBook uses?
28
Does the new Macbook Pro with Retina display have user-upgradeable RAM?
1
Extracting CPUs from multiple MacBook Pro's
1
Fixing an LED Home Cinema display caused whistling and a spark, is it salvageable?
1
Single byte memtest errors — possible to tell which RAM chip is defective?