Mac Pro gets stuck in "safe mode" after Lion upgrade

I upgraded to Lion about a month ago. Running 10.7.1 now. Things started getting unbearably slow (windows slow to scroll), can't switch between programs without a long pause, etc.) Nothing obvious is running (checked ActivityMonitor, CPU is largely idle).

Some Googling suggested running Disk Utility to repair permissions. I did that, it finished quickly and without issue. For good measure I decided to reboot in safe mode and let it do a disk repair.

But it never gets past about the 10% mark in whatever it's doing when it enters safe mode (I just have the gray progress bar and spinner.) I let it run for about 4 hours and it didn't budge. I powered it off, repeated, and same deal- always gets stuck in the same place in safe mode.

Any suggestions on what could be wrong? The disk is large (1TB), but only 357GB in use. Should I let it run overnight? I miss the good old days when Unix kernels would print gobs of messages to the console, so you could at least figure out what it's doing.

Update: so I re-ran Disk Utility and got the following: 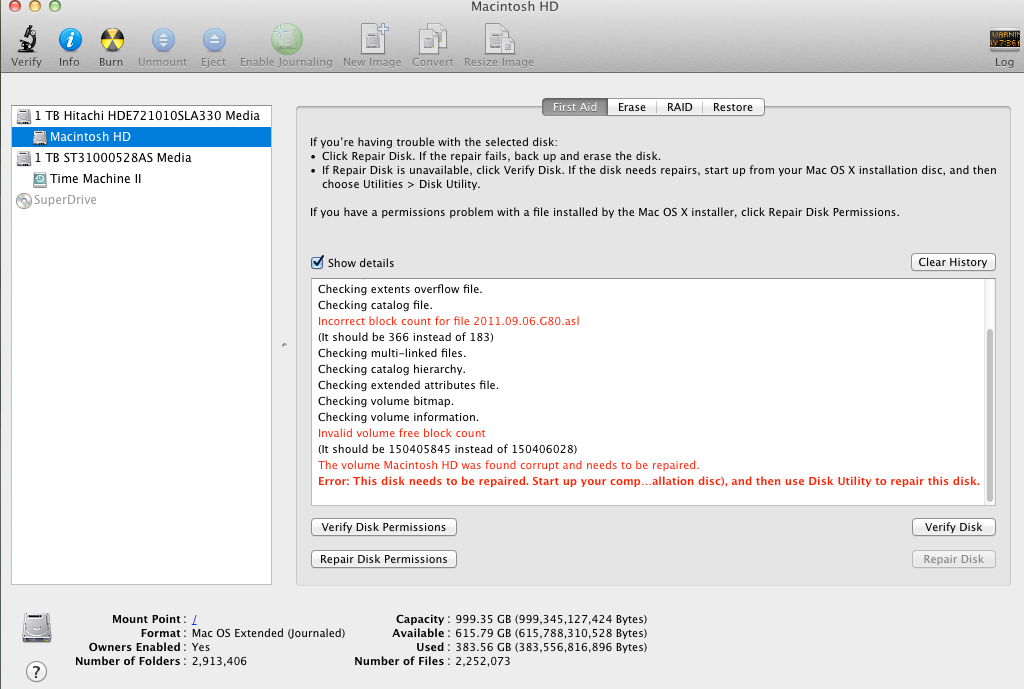 I don't have physical media for Lion, so I'm not sure what to do here. Can I do a disk repair from a Snow Leopard DVD?

Update 2: Booted into the recover partition with Cmd-R. Ran the recovery successfully, system boots, it's fine.

But if I try safe mode it still hangs. Booting Cmd-V shows a quick fsck, then it boots up normally, so I can't see any problems there. It just seems to hang in safe mode.

Update 3: Booted single-user, ran fsck -fy as suggested by bmike. I let it run overnight, and it found no problems. Interestingly, I do get:

on the console when I powered on my monitor. It repeats if I power-cycle the monitor. I have a USB Bluetooth wireless plugged into that monitor (which is in turn plugged into the Macpro's USB).

The USB-Bluetooth is there because my Macpro's internal Bluetooth arrived non-functional from the factory 2 years ago, and I gave up with Apple customer service on getting it repaired. I settled for the USB-Bluetooth plug to handle my bluetooth mouse.

I wonder if having this USB-Bluetooth is somehow causing the Safe Mode hang.

Assuming it boots, you can halt and then boot in verbose mode (Command-V) to restore all the console glory.

You can also peek at /private/var/log/system.log while on single user mode to see what was happening when the clock was passing faster than the gray progress bar.

I was only able to solve this by doing a clean install of OSX Lion, then used Migration Assistant to copy over my data. Now I'm able to boot to safe mode successfully.

What forced me into doing the clean-install was that my Time Machine backups started failing. I don't know why, but it would fail repeatedly trying to copy the same files (I could cp -a them just fine on the command line). Looking at the system logs, it was the same files every time.

TM also failed to backup the system to my backup-backup TM drive (I alternate between two physical TM disks). It was only happy after I formatted one of the drives and started from scratch.

Here's what I did in detail:

I'm really not happy about losing my older backups, but I needed a stable system more than I needed the old data.

This has been a really frustrating experience. I'm very careful about backups, yet every other release or so, OSX manages to trash them for me.

Not the answer you're looking for? Browse other questions tagged macos safe-mode .