I have several memory questions regarding OS X 10.9.5

Also, can I erase photos from iPhoto that I no longer need and will this give me more memory?

Attached is my memory indication. 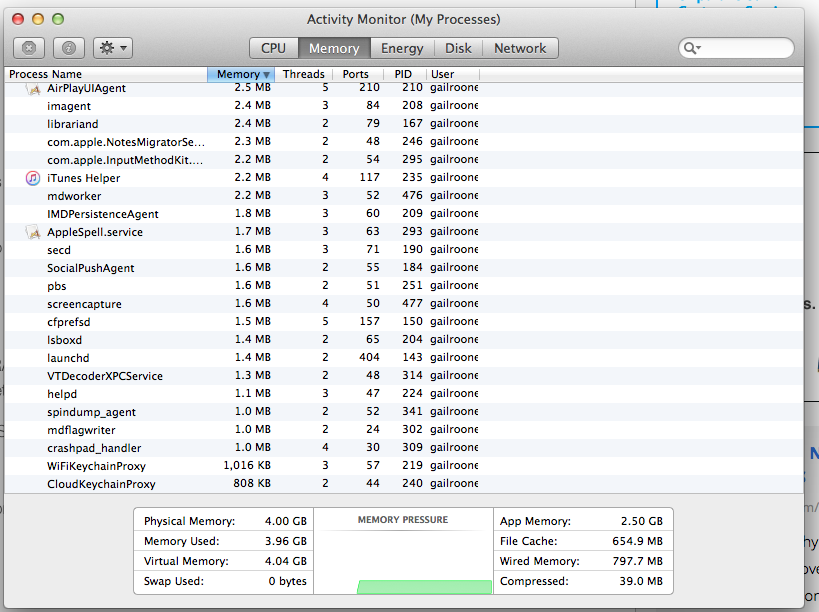 It looks like you're running Mavericks (10.9.5) based on the screenshot you provided. That being said, why would you want to downgrade to Snow Leopard (10.6.x)? Yes, it is probably a touch faster than Mavericks, but it isn't supported anymore and doesn't have the memory compression feature that might help a bit for a memory hungry application like CS3.

Either way, you have 4GB of RAM which is enough to do basic things on the machine but with CS3 it is probably going to be a potentially sluggish experience if you use it heavily and have more than one application open. I would suggest upgrading your RAM to at least 8GB if you can. What kind of Mac do you have?

Bing is your friend...

Specifically, regarding the RAM needed:

Photos in iPhoto are stored on your drive, not continually stored in memory. This is irrelevant.

You didn't mention what Mac you have. This is important in determining if you are able to upgrade or not.

I run CS5 on a 9 year old 4GB machine and it works great on 10.10. By just limiting what else I run, I am able to keep my memory pressure in the green despite also having the current World of Warcraft client up. Surprisingly, web apps are total pigs - a well used Youtube window in a web browser can gobble over a gig.

CS3 is built with lower capacity machines in mind, so I think you'll be fine.

Not the answer you're looking for? Browse other questions tagged mavericks memory adobe .

2
Understanding active, inactive, free and swap memory allocation
0
iMac 2009 works slow
4
iMac slow and unresponsive after Mavericks
1
Can Apple Diagnostics be wrong about memory issue?
1
Why do the Image Capture Extension and softwareupdated processes consume so much memory?
1
Troubleshooting a slow Mac - OSX 10.9.5
16
How can I upgrade to any macOS version that is no longer available in the Apple app store?
0
Late 2015 iMac 27 freezes than crashes and restarts - often and apparently randomly
7
Will older Adobe Applications (CS5/CS6) work with Mojave?