What can I do when iTunes multiplies albums?

For as long as I can remember, iTunes has had bugs that will split the songs of an album into multiple albums with the same name when one edits the album name. This happens infrequently and seemingly randomly, and could usually be mitigated by selecting the offending tracks, renaming the album and then renaming it back to the correct title. But now I have this:

And the trick does not work. Changing the album title actually renames it but does nothing to join the fragments. Oddly, renaming the artist does rename the artist, but the change does not show in the artist bar on the left. Does anyone have the same experience and suggestions as to what to do?

I often have this issue, and I can fix it by selecting all of the offending tracks (e.g. the entire album) using Option + click, right clicking and changing the "Album Artist" to something random (I usually use "asdf") and then doing to same thing to change it to the correct Album Artist. Doing this forces iTunes to re-index the album and put the parts together.

If this does not fix it, then look for any other data that should match between all the tracks but doesn't. iTunes is splitting the album because of one of the tags, and by setting the offending tag to the same on all of the songs it forces iTunes to put it together.

As willem.hill stated correctly: the best way in approaching this issue, is to change all tracks of the album in question in one go. 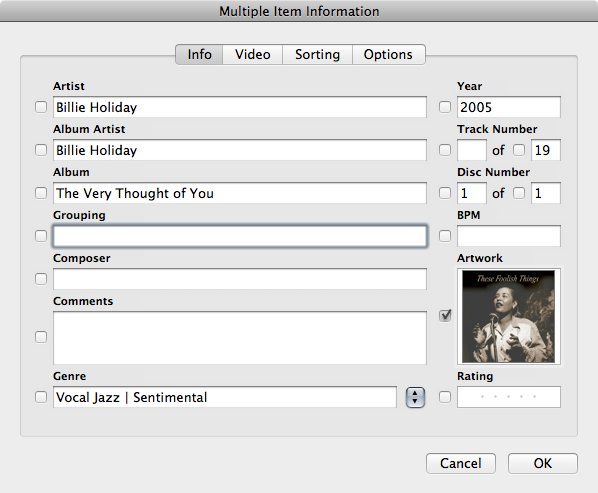 Not the answer you're looking for? Browse other questions tagged itunes music .

3
Make iTunes handle albums with different artists
0
Make iTunes playlist track changes in iPhone library?
2
Automatically Retrieving Album Names for Unknown Album Songs in iTunes
1
How can I view recently added songs in iTunes grouped by Album like the Songs view does?
0
How to sort remixes under remix artist name in iTunes
6
How create a smart playlist that shows only full albums in my library?
1
iTunes starting playlist in different order than view
6
How do I add the "explicit" tag to albums in iTunes