How to simulate slow internet connections on the mac

What's a good software solution to slow down internet connections on the mac for testing and simulations?

My primary need is when testing code in the iPhone / iOS simulator, so slowing down the connection for specific applications or processes would be great.

Apple has made a very handy official tool to slow down the network connections on you Mac for testing purposes. 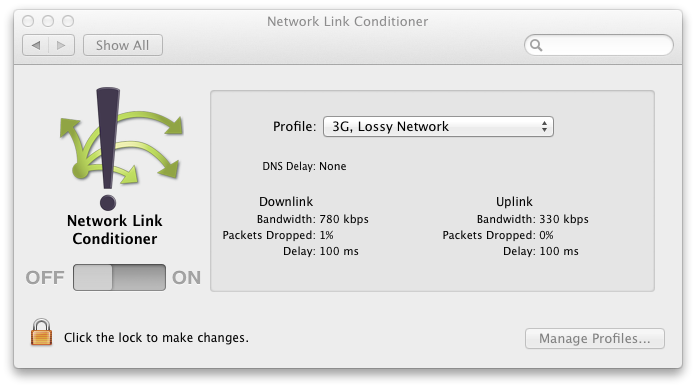 Older versions of Xcode before version 4.3.2 embedded a copy of this tool. Now, you use Xcode to download it directly in a similar manner to the iOS simulators and developer documentation.

There are 11 built in profiles from a Lossy Edge network with 400ms delay to a cable modem. If you need other limits, you can create custom profiles with your own settings or you can also use ipfw yourself as described in Craig Hockenberry's article slow ride, make it easy It also mentions the Speed Limit panel by Mike Schrag that is a smaller download than Xcode, but has fewer options than Apple's tool.

It slows down the entire network stack, so you can't throttle on a per app basis without doing things like install lion in a virtual machine and set that VM with a throttled stack.

OS X 10.9 and earlier provide ipfw and it allows you to define custom firewall rules. Create a pipe with limited bandwidth using ipfw and you can run your tests and simulations.

Speed Limit is a System Preferences pane for intentionally and selectively slowing down specific ports and domains.

To add to the accepted answer: it looks like you shouldn't need XCode, just an account at the Apple Developer website (simpler than first downloading the 2GB XCode package if you don't have it already).

Go to https://developer.apple.com/downloads and search for "Network Link Conditioner" or "Additional Tools for XCode", the latter being the name of the package it's found in.

If you want to go all out and shape everything you can use:

I believe this also affects localhost pipes which slowed down my vs-code debugging, so be mindful of that.

If you only need throttling for Web development, I can wholeheartedly recommend Charles. It's an excellent tool for debugging HTTP applications anyway, and among its many features, it's got a Throttle option. The software isn't cheap, but it does an excellent job.

You can also use ipfw piping to slow down your network.

First, setup a virtual "pipe" to limit throughput to 800KBit/sec:

Then you can setup rules to push traffic through that pipe (pipe 1). (ports 6881-6890 being bittorrent traffic)

Here's another example to limit traffic down to 10Kbit/sec from a specific IP address:

Not the answer you're looking for? Browse other questions tagged macos mac network performance internet .

20
Bandwidth limiting in Yosemite
1
How to choke network preformance on OS X
36
Bandwidth shaper or bandwidth controller application for Mac OS X
36
Managing Metered Connections on OSX
18
Mavericks Finder spins when opening folders
12
How can I simulate having a slow CPU?
12
Can a Mac's airport card run 802.11 N, G, B or A only?
5
Configure WLAN as metered or tethered in macOS
1
How to throttle usage of individual computer with Apple Airport?
0
Bandwidth limit downloads in Safari
See more linked questions

12
How can I simulate having a slow CPU?
9
How can I tell which application is using the network?
6
How can I control (start/stop) applications and services that start up after reboot?
6
Blocking internet access for a specific application on Mac OS X
6
Can I control my Mac with my iPhone — over Bluetooth?
0
AirPort Express or Extreme?
8
Xcode cannot download iOS 10 simulator due to network connection issue