How do I assess how “normal” my battery is?

I understand that at some point this is going to change to some kind of "we recommend you replace the battery" message.

I am wondering if I can see this coming. 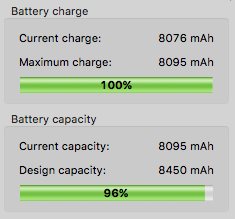 Is this number the way that OS X itself determines whether the battery is still "normal"? If yes, what is the threshold at which the battery will be deemed abnormal?

Yes, you are going about this the right way to determine your battery's remaining capacity and life.

When a battery reaches over 1000 charge cycles, it is considered "consumed", aka it's lived out the expected life cycle and any degradation in capacity is totally expected. This is never covered by warranty. A consumed battery may still hold some charge, and in some cases a lot of charge, though that is rare.

A battery would be deemed "failed" and OS X would report it if it holds less than 80% of its factory full charge capacity. If this would happen within the first year, then it would be covered by warranty. This is the way OS X and diagnostics determine the health of the battery when the complaint/concern is poor battery life.

The battery Can also unexpectedly fail if the thermal sensor in the battery goes bad. But this is something that's impossible to preventively pick up with software.

Not the answer you're looking for? Browse other questions tagged battery .

4
Macbook Battery Cycle Count (Unibody White 2010)
6
Does the real-world MacBook Pro battery life scale linearly with it's capacity?
0
Is there a way to find out information on battery through macbook serial number?
2
Macbook Pro (Mid 2012) Battery Not Charging
3
Is it normal for a MacBook Pro battery to regenerate itself?
11
How does Coconut Battery determine a Macbook battery's design capacity?
0
Macbook Air - old battery charges, replacement battery does not
0
Care and feeding of the 1st gen Apple Pencil and its battery