How do I wirelessly stream my movies to my projector?

I love using my Airport Express to wirelessly play my music.

I have a projector at home, and I would like to wirelessly play my movies, which were not downloaded with iTunes.

I was considering purchasing an AppleTV for this purpose. Do you think it is a good solution for my material which is not iTunes-related?

Depends a lot on what file formats you've got and what sort of quality you're expecting. If your library is mostly h.264 format (typically mp4, m4v, and most mkv files) then the Apple TV should work pretty well for you.

Anything in an mkv container will need to be converted to an mp4/m4v container, but that can be done losslessly most of the time (i.e. no transcoding of video, just extracting the component streams and muxing them into an mp4 container - you may need to transcode the audio, but that's easy and quick to do).

If you have a lot of non-h.264 stuff (i.e. anything in .avi, DIVX, etc.), you'll need to transcode it, which means losing some quality and can use up a fair bit of CPU power. You can transcode ahead of time using a tool like Handbrake, or you can try transcoding on-the-fly, which requires less planning ahead, but for HD files you'll need a pretty beefy CPU, and the process is pretty haphazard. You can view the steps for doing that in my answer to Can I stream any video played with VLC player to Apple TV ?

Finally, if you weren't aware of this already, you will need a computer running iTunes on at all times you want to access your library, unless you're playing files from the iTunes Store or Netflix.

The streaming of music and video to Apple TV is quite remarkable in my book. Having Safari on the iPad, iPhone seeing the AppleTV as a target for many video types is still like magic to me.

Not everything streams, but if it's HTML5 video or something you don't mind placing under iTunes's purview - it's a great solution. As AirPlay gets more prevalent, the web sites that will allow this should grow over time. With media you control, it's ready to go with perhaps a re-encode if it's not something the Apple TV expects to play out of the gate.

My suggestion is yes, get the Apple TV as I think AirPlay will become a huge part of Apple's living room strategy going forward.

I've found a somewhat convoluted yet surprisingly effective way of streaming videos to my Apple TV from my computer, as long as you have an iPhone, iPad, or iPod Touch. Get yourself the fantastic $2.99 Air Video app. This app, coupled with a free client app you install on your Mac, streams movies from your Mac to any iOS device. You tell the client app which folders to share, and from your iOS device, you see those folders and all of the videos contained within them.

Now, and here's the best part. It does live transcoding to your iOS devices. It supports all sorts of file types: avi, mkv, xvid, you name it. This transcoding works incredibly well, and I've never noticed any sort of stutter or any problems when viewing videos from a 2009 MacBook Pro. So no manual transcoding, or setting up some VLC transcoding functionality.

The even better part is that now, Air Video supports AirPlay. So, you can beam videos from your computer, to your iOS device, to your TV, all while being transcoded live and being controlled from your iOS device. This setup works great, with again, virtually no lag or stutter over a standard 802.11n network.

One caveat, I'm sure there's some sort of quality loss, and I haven't done any detailed comparison or anything to see what that loss is. Everything looks pretty good to my eyes, though my 40" TV is smaller than a projector. But give it a try, as again, it makes watching videos from your computer to TV incredibly fast and simple. 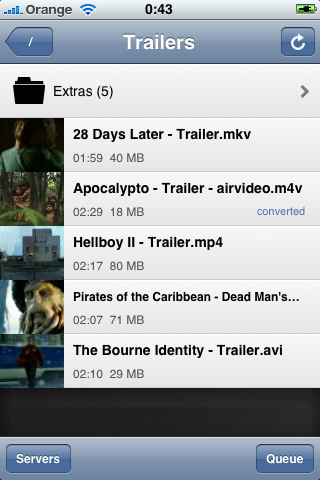 Not the answer you're looking for? Browse other questions tagged appletv streaming airplay .

14
Can I stream any video played with VLC player to Apple TV?

6
Can I set up an Apple TV to receive content from a Synology NAS?
1
Airport Express constantly can not stream music from any device
3
What third party devices are air play compatible?
0
How can I show only certain movies in iTunes on the Apple TV 2nd Generation?
3
Simultaneous use of Airport Express and Time Capsule
1
Minimal Apple TV Setup
6
Do I need Apple TV to stream wirelessly to my TV?
1
Is latest 16" MacBook Pro powerful enough to stream 4k video from Plex to AppleTV without buffering issues?