I am currently developing an iOS application. I'm considering not supporting anything less than iOS 3.1. I was wondering, can I expect a huge backlash from customers that buy this application and try to use it on devices that haven't been updated in years?

Just to add to the good data already available, here's some June 2011 data from a free, "who buys the next round" app, which may be a bit more representative than Instapaper: 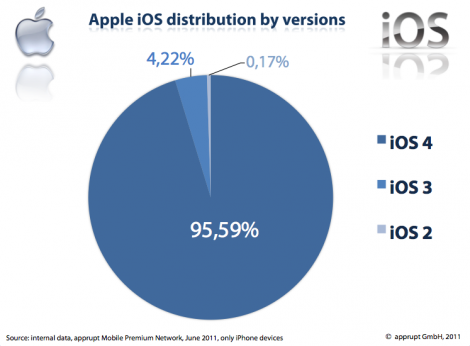 While not quite as high as the percentage of Instapaper users, more than 95% on iOS 4 suggests you won't be missing out on a big number of users.

You can find Marco Arment's stats on iOS version he collected from his Instapaper app (as CanuckSkier say in the comment, Instapaper is generally used by tech-savvy people, so "real"-people usage might be slightly less). 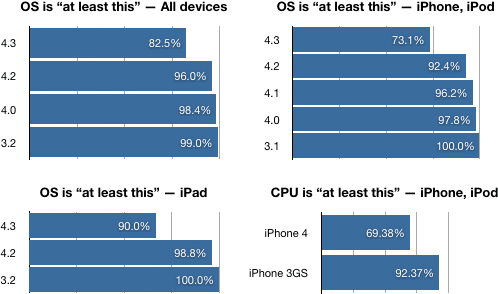 You can check for yourself. Look in the iTunes app store for popular apps which cater to the same customer demographic as yours, and which only run on later OS versions (3.2, or 4.1 or later). Check the reviews for those apps, and see the proportion of negative comments they get for not supporting such-and-such.

Usually the amount is tiny, as users of older devices, and people who don't update their OS, don't buy as many apps as people who have the latest devices and/or upgrade their OS. Many popular and highly rated apps are only compatible with very recent OS versions.

So, no huge backlash.

Time spent supporting even 3.1 is worth less as time goes on, whereas time spent focusing on the new features in later versions pays off now, and keeps paying off.

Not the answer you're looking for? Browse other questions tagged iphone ipod-touch ios .

3
Unlock iPhone 4 iOS 5.0.1 with baseband 4.11.08
4
OS X/ iOS Password Managers
3
How do I update iTunes Match info on my iOS 7 device?
1
iOS Developer Account - 50GB iCloud space still available. Will it go away?
6
Why is the process named geod in my iOS simulator trying to access irs.gov?
0
Dangers of getting replacing iPhone 6S screen replaced at third party store
0
Will iOS 9 reject an iOS 10 backup restoration attempt to the same model phone?
2
How do you determine if your iPhone is eligible for the latest Safari?
0
Will WhatsApp still work on iPhone SE/6/6S if I have a newer version of iOS than iOS 10?