Is it normal for there to be a 5min+ period of high CPU usage when going to sleep under El Capitan?

Under Snow Leopard, after I closed the lid it would take something like 30 seconds to write memory contents to disk before the HDD would spin down and the sleep light begin to pulsate.

Under El Capitan, it takes five to six minutes between when I initiate sleep and when the machine actually powers down and the sleep light begins to pulsate.

Screenshot after waking from full sleep; note CPU usage was very high, then moderately high while going to sleep; there is a momentary spike (presumably upon wake) and then drops to near idle again: 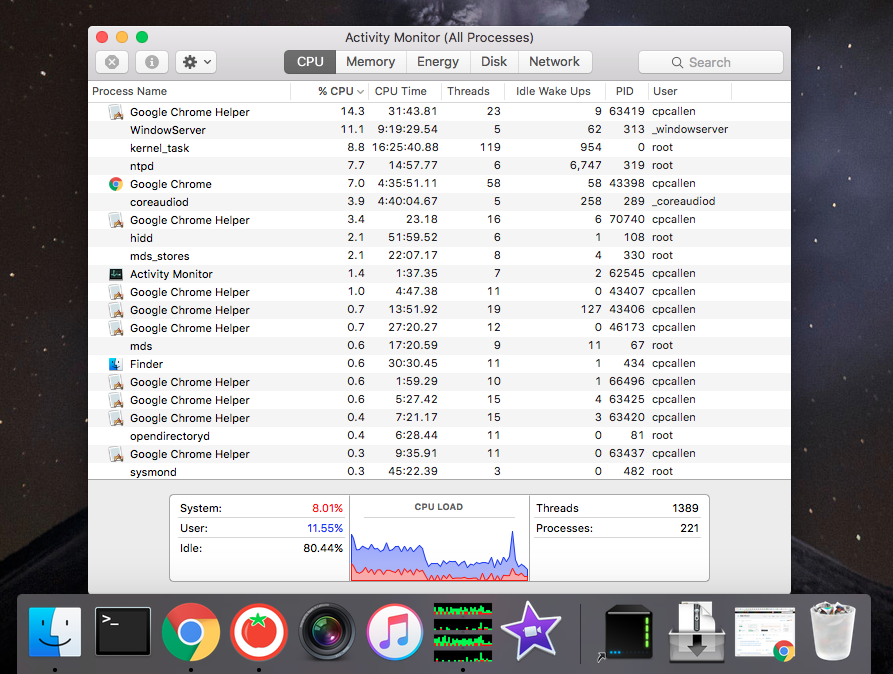 Sreenshot after putting machine back to sleep, then waking again after one minute (while machine was still busy); note CPU was near idle until sleep initiated, whereupon it was very, very high, then very high, then back to near idle upon wake: Question: Is this behaviour normal? If not, what can I do to fix it? If it is, is there anything that can be done to mitigate it?

Is it normal? No. Not with an optimal install, optimal hardware & configuration. Is your computer stock or have you installed non-oem parts? Age can also be a factor as the thermal grease can deteriorate over time especially when a cpu gets overheated. Also Apple had indicated that you need a minimum of 1GB free to even be able to run effectively. My experience is that having much more than 1GB allows the system to run best.

What can you do to mitigate it? See the second response to fix it or replace the machine.

Would just add - I had a similar problem with sleep on a MacPro 1.1 Tower. Turned out it was heat... which might explain why your fans are going up also. The Mac wont go to sleep above a certain temperature so will continue to run until this comes down which could be 60 seconds or 10 minutes.

I installed SMC Fan Control, a free app which allows you to take control of your internal fans and (typically) set them 25% higher. There is a free Temperature Monitor app that reads presents all the sensor values across your Mac. Sure enough, Ram and CPU were running 90+ degree under load (I'd installed additional server grade Ram previously. Whilst this wont kill them, its too high for sleep.

SMC sorted the temperature and the Mac sleeps in seconds now.

Not the answer you're looking for? Browse other questions tagged macbook-pro macos sleep-wake cpu .

4
How do I find out what application is trying to wake my MBP?
2
Scrambled screen when going out of sleep
3
Macbook doesn't stay asleep when lid is closed
5
How does Parallels' CPU and ram usage work? When to shutdown virtual machine?
3
MacBook Pro Retina takes a few seconds to power on display after sleep
0
Mid 2010 MacBook Pro kernel_task extremely high CPU usage (150%+) lags and kernel panics
5
Ensure MacBook Pro is fully asleep when travelling
1
2017 MBP screen flashes green or yellow when waking from sleep