What voltage readings should I get from my 60 watt Magsafe?

What voltage readings should I get from my 60 watt Magsafe if I check the pins with a multimeter? My readings are all below 1 volt (I checked all combinations of pins), but I don't know if this is correct since there is no load. Also what pins should I check? My computer is a MacBook Pro 2011 early model.

Below is taken verbatim from the above link.

When the Magsafe connector is plugged into a Mac, a lot more happens than you might expect. I believe the following steps take place:

If the Mac is happy with the charger ID, it switches the power input to the internal power conversion circuit and starts using the input power. The Mac switches on the appropriate LED on the connector using the 1-Wire protocol.

This process explains why there is a delay of a second after you connect the charger before the light turns on and the computer indicates the battery is charging. It also explains why if you measure the charger output with a voltmeter, you don't find much voltage.

The outer large pins are Ground. 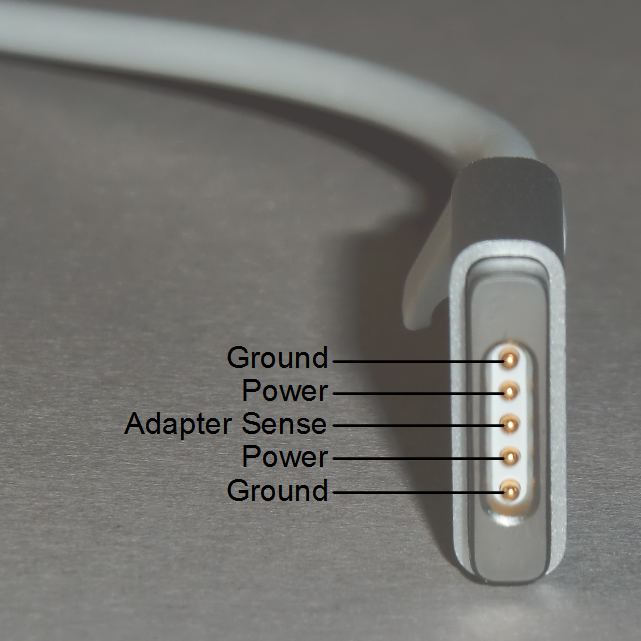 you can touch the cables with your fingers and the resistive load will be applied at the same time with the multimeter. You will get the 16-20V reading. No joke, you will not die from 16V.

3
How safe is it to replace the magsafe 2 connector with another one by simply connecting the wires?
2
MagSafe: Where is the charger ID stored?
1
What are the electrical requirements for magsafe charging?

2
Fluctuating voltage on Magsafe charger
1
Can I use a Early 2011 MacBook Pro 13" charger with my Late 2013 MacBook Pro 13" with the MagSafe Adapter?
1
Which chargers to buy for a charging station?
6
My Macbook Pro gives electric shocks. How can i measure it?
3
Does the MacBook Pro 15'' 8,2 Early 2011 accept both A1321 and A1382 batteries?
7
Are Macbook Pros with a rusted / corroded MagSafe port safe to operate?
1
What are the electrical requirements for magsafe charging?
1
What is the voltage output of an Apple 85W MagSafe 2 model A1424 without a load?