Open links in their respective apps?

It used to be that if I clicked a web link to an NYTimes article from Safari, the article would open in the NYTimes app. At some point, I must have changed this setting, and now, NYTimes links open in Safari.

Edit: I have NYTimes app installed, I am on iOS 9.3.1, and I am not using private browsing, so some of the typical answers (thanks John Ramos!) aren't helping here.

I have also tried deleting cookies, history, and local data from Safari, and uninstalling and reinstalling the NYTimes app -- all have no effect.

This feature is called Universal Links. You can read Apple's documentation on this here.

Basically for this to work the developer of the NYTimes website needs to have a file called apple-app-site-association on their server. You can view that file on the NYTimes website here http://nytimes.com/apple-app-site-association. Within the file they can specify which URLs are redirected (on the NYTimes site, any that have a year between 2000 and 2099 immediately after the domain name) and which apps they are redirected to (four NYTimes apps). At a glance the file looks okay on their website, but interestingly it does mean that only links like this http://www.nytimes.com/2016/... will work, while anything else like this for example http://www.nytimes.com/reuters/2016/... will not. So right away it is worth noting that they've decided that they don't want all links to the nytimes.com website to open in their apps.

They also need to change a setting within their iOS apps to list which domains it is willing to receive links from. This takes the form of an entitlement called com.apple.developer.associated-domains. Due to the way their app is configured I'm unable to check the plist files within their app to see if they are configured correctly. But in my own testing, this feature seems to work okay. When I go to this article I've randomly picked on DaringFireball and click on the NYTimes link, the NYTimes app automatically launches and opens the article rather than Safari. 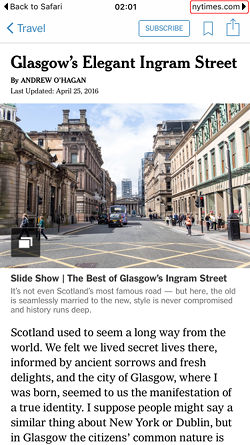 There are two methods to re-enable Universal Links for that site. Either long press on a NYTimes link and select "Open in "NYTimes" from the menu, or open the NYTimes website in Safari and click on the "OPEN" link in the Smart App Banner at the top of the site. 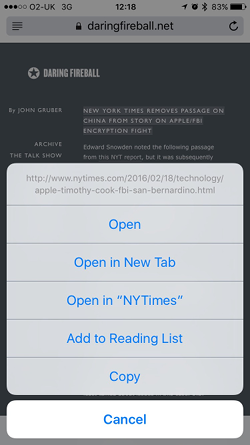 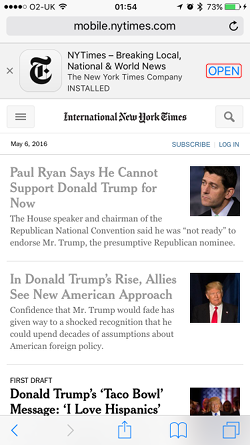 Let us know how you get on.

This seems like a end user question, so I will answer as such. There is a 3rd party app called "Opener" (it's not free, but super cheap) that allows you to open in a supported app through their third party app. You click on the "export" icon along the top navigation of the browser:

Additionally if you came about the URL from a search engine (in Safari) you can open the URL clicking on the "info" icon in the pre-header and if the developer universally linked it will open in their app (irrespective of if it's active or closed).

The New York Times seemed to change the way their website handles links, as my iPhone does not open NYTimes articles in the app either. Most likely, the developers of nytimes.com decided to stop the site from auto-opening articles in the app because people we having trouble with it not working (or worse, asking you to download the app, interrupting your reading). The mobile NYTimes website is good enough that they may have decided to simplify the process by just having you read the article on the web.

One workaround: save the article for later from the web, then go to the Saved section in the NYTimes app and your article will be waiting for you in the app.

Credits to user fbara for suggesting the "web developer's fault" theory in the comments above.

Not the answer you're looking for? Browse other questions tagged ios mobile-safari .

1
Safari not saving password on iPhone 4
10
iOS 8: Prevent Safari Mobile from reloading tabs by default
18
Safari on iOS 9.2.1 / 9.3 won't open links
1
Uninstalled apps still appear in settings
1
When using Private Browsing within Mobile Safari, is any data saved to the iOS filesystem?
5
How to stop Safari from hijacking Amazon app links?
2
Safari on IOS doesn’t save cookies
0
How do I control where links open on iOS?
1
How do I open a .webarchive in iOS Safari?