Can I make a symlink (to a .app folder) in Applications directory show up in spotlight?

I used brew to install MacVim and it put it in /usr/local/Cellar/macvim/7.3-61/MacVim.app

In the Finder, press CommandShiftG for Go to the Folder. Type /usr/local/Cellar/macvim/7.3-61/ and press return. Select the file (actually a folder) MacVim.app Press CommandL for Make Alias. Depending on permissions, you may be prompted for an administrator password here.

Press CommandN to create a New Finder Window. Press CommandShiftA to go to the Applications folder in that window.

Drag the newly created alias from the window in which it was created to the window containing the Applications folder. Rename the alias so it no longer ends in " alias".

The alias method did not work for me. A better option is to use Automator to create an Application that runs a shell script: 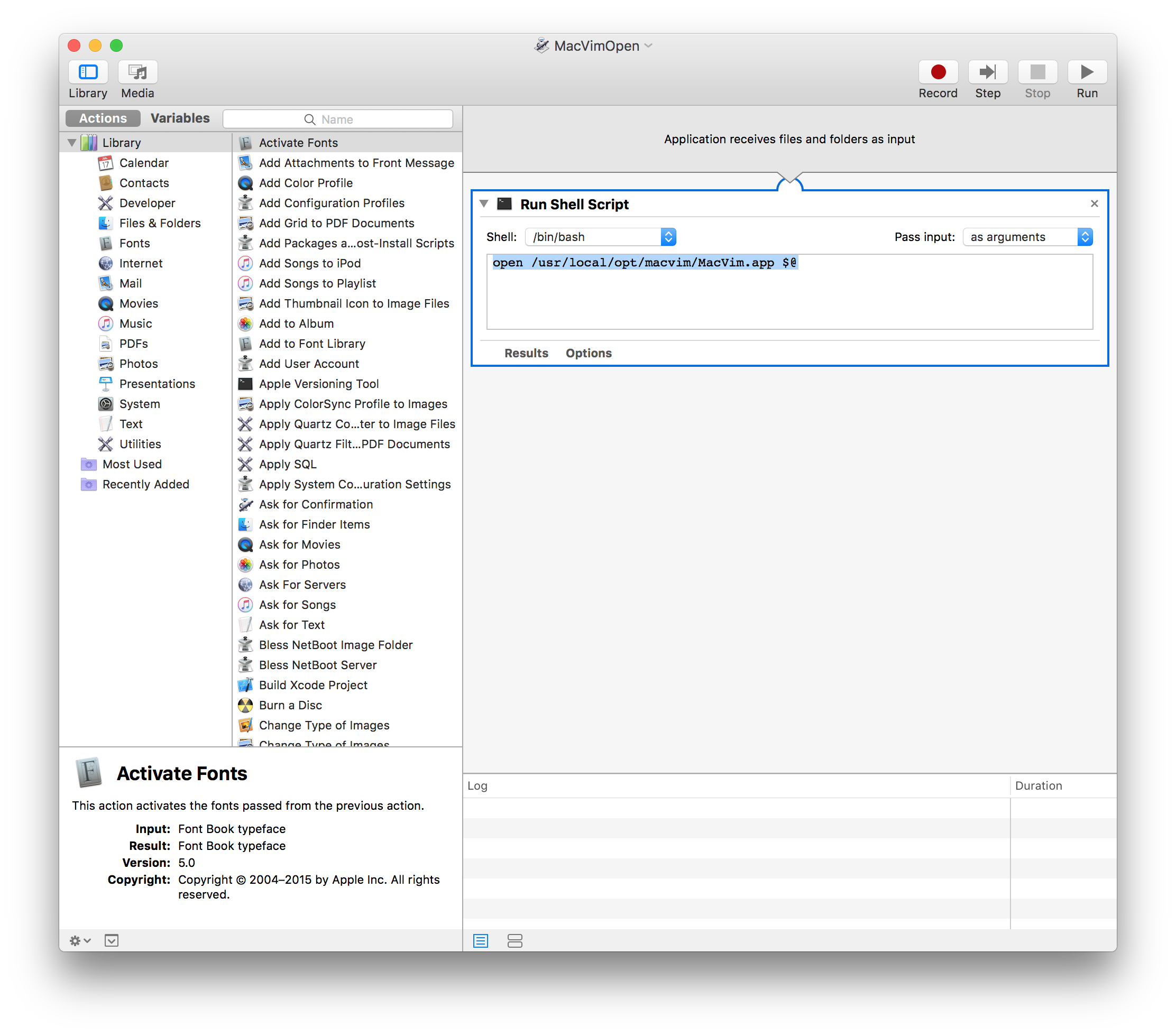 Also, linking directly to the MacVim.app in the Cellar directory like some of the other answers suggest binds you to a specific version. If brew upgrades MacVim, your link will still point to the old version. Rather, you should use:

as this location is automatically symlinked by brew to the most recent version.

This worked great for me. I save the Automator file in iCloud so I can conveniently add the app on other machines.

The way I've solved this is using a shell script and appify.

For example make a script with a text editor that contains

Run appify on the shell script and it will make an application you can put in /Applications that will invoke MacVim. This will show up in spotlight.

To keep things nice and scriptable, you can use osascript to run a little AppleScript and create your alias automatically.

For those who use homebrew to install macvim (totally recommended)

Run the following after install

In particular, like mentioned in other comments here, I also wanted MacVim to be available when using Open With... from Finder, but with either the symbolic link or Finder alias, MacVim would remain grayed out.

What worked for me was the simple Automator script (as zim described), with the "Run Shell Script" command. The only thing I had to do differently than what zim showed in his answer is adding the -a parameter to open:

Without the -a, when used with "Open With...", MacVim would launch, but also the parameter filename would open with whatever its default application was -- so I would get both MacVim with empty document AND TextEdit with the file I had selected to open (rather than MacVim with my selected file opened).

The automator script can be copied or aliased to the Applications folder. I also changed my automator script's icon to MacVim's icon by copying & pasting the icon from the Finder's Get Info popups.

After trying several of the suggested solutions, the best thing that worked for me was to copy the app from the Homebrew Cellar to the applications directory:

Best way doing it come from homebrew it self

here is the reference:

The simple act of installing homebrew allowed me to create a symlink to Sublime Text. Perhaps you are needing more.

Install homebrew here if you have macOS

and then from command line (assuming ST is installed)

This doesn't directly answer the question, but instead inverts the install process so that MacOS will find MacVim like any app.

Now the MacVim GUI will work like any MacOS app (including with Spotlight), and the next time you open the terminal, the command vim will open MacVim in the terminal instead.

Sounds like you could do the following from the Terminal.

You might have to use sudo to put the symlink in the /Applications directory.

Not the answer you're looking for? Browse other questions tagged macos spotlight .

2
GUI applications installed with homebrew cannot be launched using Spotlight
23
Does Spotlight normally index links in ~/Applications?
2
How do I add folders to spotlight search priority?

2
How do I add folders to spotlight search priority?
23
Does Spotlight normally index links in ~/Applications?
1
Can't install zeroMQ on Mavericks
4
macOS apache installs on different directory with homebrew, how to start/stop?
4
Hide Everything For Cmd+Space Spotlight Search but Applications
1
How to bring application to foreground using Spotlight/keystrokes (named windows/named applications)?
11
Spotlight doesn't show applications